Huemn’s Fall 19 paid homage to the raw energy of the young Kashmir landscape with a play of contrasts and set against the backdrop of a beautiful, bountiful conflict ridden landscape. The entire line is a play of contrasts and strong references from the popular 90s sneaker culture trend reflecting in the garments in terms of shapes, cuts and silhouettes in denim and fleece. The essence of gender neutrality was well-narrated and it is about time to understand fashion with a bigger message, a stronger voice.

Backstage, Shyma Shetty, one half of Huemn, said they were inspired by Kashmir again but had a different approach. This time it’s the other side—the youth of Kashmir and their raw energy against the beautiful but conflict-ridden landscape they live in.” And while ’90s sneaker culture came to the fore along with the label’s signature athleisure in their collaboration with Reebok’s ‘Alter the Icons’ collection, what really hung in the air was Pranav Misra and Shetty’s voice-over in the background asking all the real questions: “Why are we here? What are we going to do? What are we here for?” Questions they called our generation’s focus. Questions that must be asked as it is the the essence of being human (or Huemn).

Prashant Verma’s collection was backed by an evocative performance art and the gossamer gowns and layered apparels were close to moving poetry. The Miracle Show was beyond gender, age and the idea of established perfection. It was interesting to see a collection so powerfully decked with a strong storyline. Varma’s versatile work was a step-up from his collection last year.

Samant Chauhan celebrated women, their journey and strengths with a beautiful collection in ivory with floral detailing and the texture was a win-win here. The sheer magic of the show was close to a moment of time-travelling and embracing the many dimensions of her and her world.

The social commentary continued with Chauhan’s show, but this time we were transported to somewhere in Africa. As the models walked down a dried-grass lined runway in lofty whites, there was a semblance of summer in the autumn/winter collection. The show notes read: “Chauhan garbs his woman in layers, capturing the myriad hues of her existence, the conflicts and harmony, the distortions and the truth weaved in detailed embroidery in jewel tones and shades of pink, orange, rust and burgundy on whites and ivories.”​ 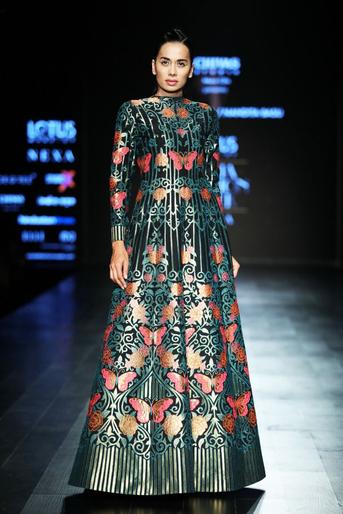 The Lotus Make-Up India Fashion Week Autumn Winter’ 2019 day two was an ode to the likes of ivory and white, colours, structured silhouettes, pop-cultural trends and voluminous sheer textures, traditional motifs, metallic foil prints and modern industrial art. It was fascinating to see the idea of design and the parallel storytelling around it as it gave a different perspective.

The opening show ‘Lightness of Being’ highlighting the tranquil state of mind displayed collections by Megha Jain Madaan, Bhumika and Jyoti Syaahi, and Vidhi Wadhwaani. Sushmita Sen looked utterly majestic walking the ramp for Bhumika and Jyoti. She wore a parrot-green off-shoulder dress with an asymmetrical hem with a complimenting turban of the same colour. Diana Penty and Sophie Choudry were also spotted at the event. Another striking collection was by the due Pallavi and Rahul Singh. Their collection bespoke of soft pastels wrapped in traditional prints and patterns. The duo presented their collection along with Aartivijay Gupta’s exquisite collection conveying the idea of the art of design. 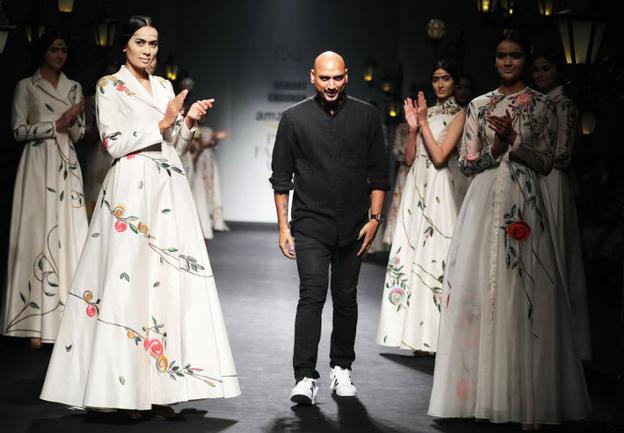 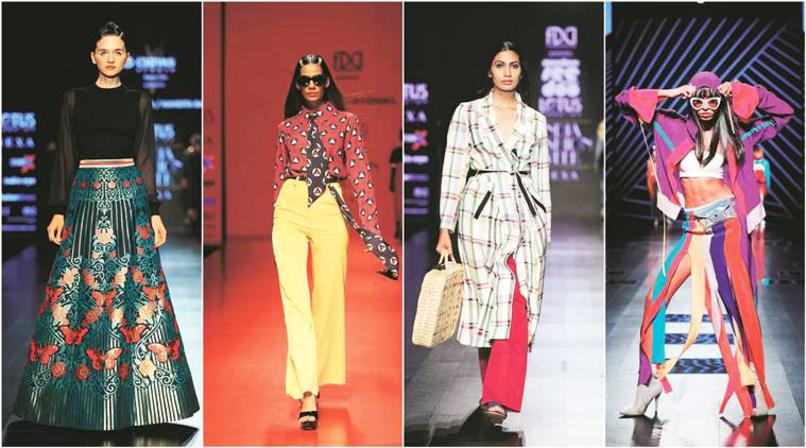 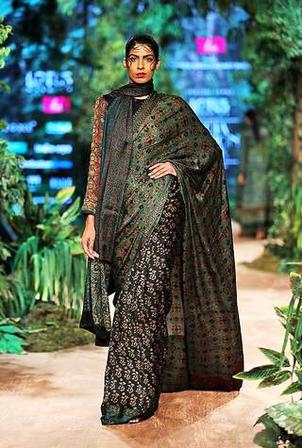 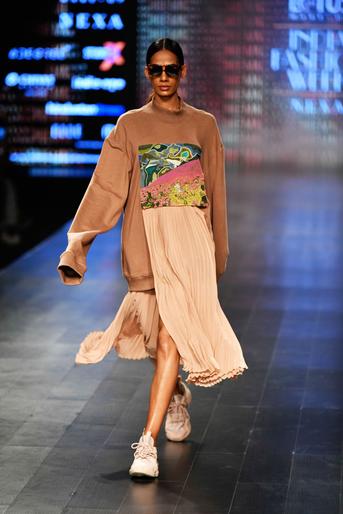 The last show for the day and also the most upbeat of the day, Suneet Varma’s bridal couture collection, in association with Nirakara Jewels, was all kinds of happy and shiny. From foot-tapping music to paillette-covered lehengas, ruffled and bedazzled saris and even evening gowns, there was never a dull moment. In his signature style, Varma ended the show with a siren red lehenga with an exaggerated veil. And just when you thought it was over, the designer presented a bold black lehenga skirt hybrid with a crystal bodice.

The idea of design and story-telling unfolds in a special way at Lotus Make-Up India Fashion week 2019 with pop culture trends, silhouettes and traditional motifs.

‘Chitrakoot—The Enchanted Forest’ was designer Shalini James’ ode to the eponymous forest, the site of many a story in Indian mythology, at the Lotus Make-Up India Fashion Week Autumn-Winter 2019 show held in Delhi. The foliage of the imaginary forest came to life through the collection’s 12 ensembles.

Shalini was chosen by textile company Liva, along with three other designers—Rina Dhaka, Sahil Kochar and Samant Chauhan, to be part of the opening show titled the ‘Liva Eco Greenheart’. For the collection, Shalini worked with LivaEco, a sustainable fabric from Liva made from wood sourced from FSC certified forests. The designer picked the theme —the forest — as a nod to the origin of the fabric. She had barely a month to work on the collection but she says, sounding satisfied after the show, “It looked good on the ramp, and the feedback too has been good. There were so many variables, but the process was beautiful.

Shalini spent a couple of weeks in Jaipur, getting the fabric dyed and printed, an experience which she enjoyed, especially the randomness of it. It was resist dyed and bagru printed. “So much of nature comes into it, if it’s cloudy the colour changes, sunny then different. But that too is the point of sustainability, rather than stick to the Pantone sheet. Vagaries should be imbibed into the design process, if one wants uniformity then why not go with mill made fabric. The variation, from the palette, gave the fabric beauty.”

The printing was done at a unit, which has experience in printing and dyeing, as the work demanded expertise. This collection is reminiscent of Shalini’s fashion week debut collection which made an impact.

The silhouette for the collection is a melding of Indian, Western and Indo-Western jacket, pants, tunic, anarkali, angarkha and sari in peacock blue, berry red, indigo, black and bark brown. Mixed prints, attached fabric, the collection is a collage of prints which managed to create intensity with it despite being limited by the little control over the dyeing process.

‘Prama’ was a collection of elegance. From florals to pleats it was all about embroidered pastels. The collection was by Pratima Pandey and Shruti Sancheti. An intricate design collection with hues of copper was showcased by Nitin Bal Chauhan. Speaking of bold and loud summers, Wendell Rodricks presented his collection of vivid colours. Prashant Verma’s collection was also listed for the second day of the fashion week. Designer duos Abhishek Gupta-Nandita Basu and Gauri & Nainika dazzled everyone amalgamation of charm and elegance of bold motifs respectively for the closing show.