“Got a bit nervous towards the end as I was next to Gashaw. She had beaten me in the Asian Games where I finished third. I had to really push hard in the end,” said Chitra.

Ajay Kumar Saroj, probably inspired by Chitra, almost tried out a similar strategy in the men’s 1500m and was rewarded with a silver in a photo finish. Abraham Rotich won the gold with a time of 3:42.85s while defending champion Ajay and Qatar’s Musaab Ali were credited with a similar time (3:43.18s) but the Indian was slightly ahead at the finish. The Bahrain athletes had stayed away from the last Asians in Bhubaneswar in 2017.

A little later, India's Prachi, M.R. Poovamma, Saritaben Gayakwad and V.K. Vismaya, won the women’s 4x400m relay silver in a season-best 3:32.21s. Bahrain, with Salwa Naser coming up with a fine anchor leg, overtook India with about 50m from the finish to take the gold in 3:32.10s.

In the end, Dutee finished with a bronze to brush away the disappointments in the 100m and the sprint relay earlier. Salwa took the gold in a championships’ record time of 22.74s while Dutee clocked 23.24. 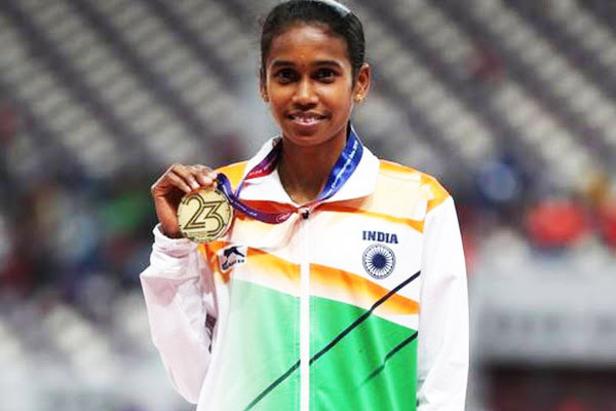 PU Chitra struck gold in women’s 1500m (clocking 4:14.56) at the 23rd Asian Athletics Championships in Doha.  With this win, she also qualified for World Championships which will be held later in the year.

The Bahrainis tried to waylay her, tried to lock her in. But P.U. Chitra smartly stayed clear to retain her women’s 1500m gold in the Asian Athletics Championships at the Khalifa Stadium. Chitra was the defending champion in the event but with runners like Bahrain’s former under-18 World champion Gashaw Tigest and Yavi Winfred in the fray, one thought that life would be tough for the 23-year-old from Palakkad, Kerala.

Chitra brilliantly overtook Bahrain’s Yavi, who had already won two golds here earlier, on the last curve and then beat a tiring Gashaw on the home stretch to take the gold in 4:14.56s and book an automatic berth for this September’s World Championships in Doha. Gashaw, whose personal best was nearly six seconds faster than Chitra’s, took the silver in 4:14.81.