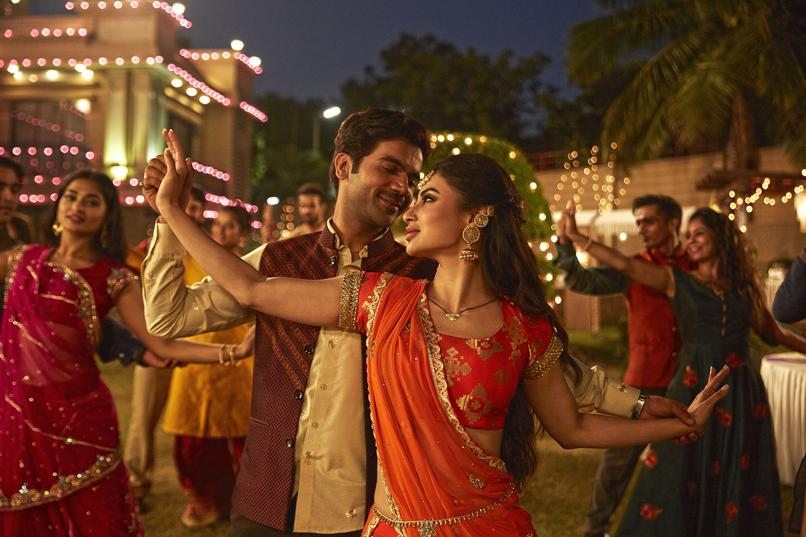 Navratri is all about a synchronised flair and bounce share Mouni Roy and Rajkummar Rao.

"Every dance has its flair and bounce" shares the graceful and balletic Mouni whilst Rajkummar Rao believes and explains "it's a beautiful and synchronized dance form" inspired by the spirit of festival, on the first day of Navratri today.

It's the first day of Navratri today and the energy around the country is that of sizzling celebration. Joining in the festive spirit is none other than the actor par excellence - Rajkummar Rao and his on screen leading lady Mouni Roy who celebrate the onset of the season with a special feeling and connection. This year, on Diwali, the duo will be seen headlining the story of a small time Gujarati businessman from Ahmedabad who makes it big after a crazy turn of events for "Made in China". The film is set and rooted deeply within the Gujarati culture making this festival count more this year.

Talking about his Navratri memories, Raj says, “I grew up in Gurugram, and over there, Navratri was about pooja-path and fasting, and watching Ram Leela being performed by local actors. I used to observe the fast with my mother on all the nine days. I do that even now, though I can’t continue for all the nine days. At that time, I saw garba only in films. During my years in the Film and Television Institute, we used to celebrate all the festivals. I had a Bengali friend with whom I would visit Durga Puja pandals. Now, Patralekhaa  and I visit pandals together and offer prayers. We’re regulars at a pandal in Andheri and we’ve also been to Dadar Shivaji Park. I’ve also been to many garba-dandiya pandals, where I’ve always felt a high energy among people. The same festival is celebrated differently across India and everything co-exists. That’s the beauty of a country like ours.”

Admitting that he loves dancing, Rajkummar shares, “I enjoy dancing and garba is among my favorite dance forms. It’s so synchronized and beautiful to look at. In fact, I love dancing so much that I have danced in random baraats with people I don’t know. Uske baad kai baar jaake shaadiyon mein khaana bhi khaya hai. During my years in Gurugram, I was part of a dance group and have performed Bhangra, Odissi, Haryanvi and Rajasthani folk dance forms. It’s something that makes me very happy.”

Delving into her memories around Navratri or Pujo festivities, Mouni says, “Navratri is celebrated across the country in different ways. Call her Maa Durga or Ambe, she is the Mother we worship. As children, Durga Puja was very special — pandals, onjoli, dancing, enjoying some amazing food, hanging out with friends and wearing new clothes. When I was studying in Delhi, I would go back home (Kolkata) to be with my parents during the festival. When I came to Mumbai, I was introduced to Navratri celebrations and garba outings. I see the same enthusiasm here, too — dandiya raas, garba, colourful clothes, young and happy faces, and some fabulous music.”

She adds, “When my father was alive, I would leave Mumbai and head back home for Pujo, but now, my mother comes over and stays with me. I try and make time for onjolion Maha-Ashtami and the other days, too.”

Given that her next film - Made In China is entrenched in the flavour of Gujarat, you can't help but wonder if the dancing queen was adept with garba or not. It’s known that both Mouni and Rajkummar have the knack to pick up dance moves easily. Ask if they had a chance to do some garba raas in Made In China, and Mouni replies, “I don't know how to do garba all that well. I can manage the steps, but every dance form has its own flair and bounce. I had to work hard to get that right. In the film, we don’t have an outright garba song, but it’s a wonderful dance number.”

Set to release this Diwali, Made In China is produced by Maddock Films in association with Jio Studios. The film directed by Mikhil Musale and also stars Boman Irani, Sumeet Vyas, Gajraj Rao and Paresh Rawal.