Ms. Simi Sabhaney, Chief Executive Officer of Dentsu Aegis Network expressed her views and perspectives regarding new trends and other aspects of marketing in an interview with Mr. Saimik Sen, Editor-in- Chief of ERTC-Herald Global.

The interview started with the question about her inception in the marketing industry, she replied that she entered the field of communication quite by chance but has stayed on for twenty-eight wholesome years totally by choice. Where else is insanity celebrated, eavesdropping revered and telling tales considered an art! What she absolutely loves about her work is that it keeps her curious and a keen observer of things and people around. Creating brand stories and taking them across the length and breadth of the country and sometimes even across the globe is extremely fulfilling. One has to continuously learn, unlearn, build, discard, and reboot. In advertising, you keep constant company with creative ideas, young people, and new challenges. A rather potent combination!

Ms. Simi Sabhaney expressed her views and perspectives regarding new trends and other aspects of marketing

​Ms. Sabhaney believes that the key ingredients to whip up an effective leader are competency, agility and flexibility. He/She needs to apply a relevant style and technique to direct and lead a set of people in a given situation. It is extremely important for a leader to be intuitive while making choices. To instinctively take position, which at times entails rolling up sleeves and getting your hands dirty and other times simply directing, delegating and empowering the team to run the show. A good leader most definitely must create leaders.

When revealing about her current projects, she stated that she and her team are engaged on all kinds of challenges. The task on hand could be about grabbing a greater share, launching a new product or entity, plugging a need gap, rekindling desire, correcting perceptions, so on and so forth. Their role is not only to fuel ambitions of big players but also to diffuse fears of small brave hearts. Because we believe that dreams may come in different colors but they always come in the same size! As partners, we need to walk beside our clients and play a role in making their dreams come true.

While sharing her insight on the changing picture of the marketing industry, she stated that change is inevitable. The idea is to recognize the change and use this truth to our advantage. Consumers are not static and their needs are ever changing. The growth of young adults, the migratory population in cities, higher incomes, higher exposure levels, all has a bearing on product, pricing, distribution, and communication strategy. The various devices our consumers interact with dictate brands’ engagement strategy and content. The definition of 360 degrees has changed; it’s no longer about replicating one message across all media. It is about crafting content as per nature of the medium and the role assigned to it.

But some fundamentals do not change. Their business will always be about ideas, ideas that are medium agnostic, ideas that have the power to influence change.

As per Ms. Sabhaney, brutal honesty always works. If you haven’t got it right, raise your hand and accept failure. Apologize. If you believe it will work, despite all odds working against you, do not be afraid to voice your views. Sell. If you are expected to tell a story that is untrue, just stay true to your job. Decline.

While briefing about the importance of thought leadership at Dentsu, she added that at DAN, ‘Thought leadership’ is expressed as a value, an action point and finally a core business strategy for growth. It is a fundamental pillar that governs our perspective on a matter believed to be common knowledge. Of course, belief alone isn’t enough, and therefore we have processes & structures in place which encourage us to showcase thought leadership across the projects we are engaged in. It is a core filter for recruiting new talent across specializations as well as for entering industry awards. Further she added if you look at the network’s acquisition strategy, you will notice we have always looked to add the best in class specialists to the group.

When asked what was her take on the initiative taken by Herald Global to bring success stories of the industry leaders to readers, Ms. Sabhaney started by saying; the next time you travel by train, bus, car or plane, talk to your fellow passengers. Strike a conversation without any agenda and you will be surprised to know how much you can learn. So reading about others’ experiences, listening to their ups and downs, peeping into their belief system, drawing learning from their success and failures just gets you close to your own goals. Very often the answer you are seeking is right there in such stories, waiting to be picked up. 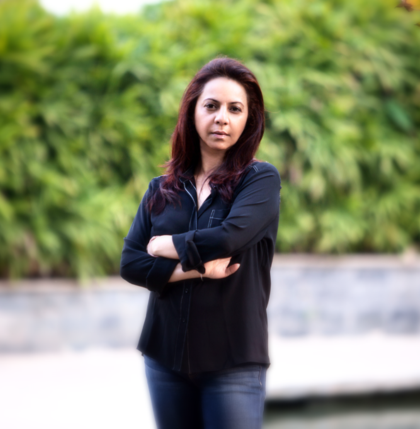