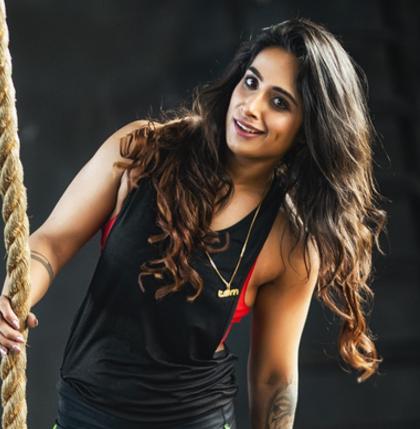 avoided the gym for the longest time as it was time consuming whilst she was dedicated IT professional.

Being a bright student and a dedicated employee we were curious to know what was her consistent motivation to be fitness professional. She explains it was always her will power. She notably points out there are many engineers but she always wanted to stand out instead of going with the flow. She says the problem of joining the flow is not knowing what to do or doing what you wouldn’t wish to do. She was always in love with the stage. After winning a fitness competition she realized a combination of fitness and stage works for her. She decided to begin the execution of her dream. She found a coach in the US and followed the plan. She admits it was tough to handle the regime along with her job. She managed it with great difficulty and won the third place in a competition. It boosted her confidence but on the other hand as she earned her name as a bikini athlete model she experienced social pressure from her parents, brothers, extended family and even her hometown. Her mother asked her to break ties with them which led her to choose between her family and budding career. She chose her passion and career with the hope and understanding that they would come around once she proves herself. She recalls her father giving her life lessons and motivating her to pursue her dreams but to stay away from skin show which she respected by not wearing sleeveless in her younger days.

She happily shares that being the Bikini model of India; she decided to share her picture with her father. With great anxiety and nervousness she waited for her father’s response which was “You look Beautiful.” She rejoiced this moment and this turning point was her moment of true happiness which has been her constant motivation, acceptance. She explains it as a green signal for pursuing all her dreams in her bucket list. She further motivates every individual to execute their dreams as she is a firm believer of completing dreams at any point in life.

With a long bucket list we wondered if she had any social challenges. She honestly reveals that with her 9-7 job and her regimes she would always miss out on social gatherings which was not appreciated. Instead of motivating her to fulfil her dreams her collegeaus were always upset about her absence. Her family was upset as being a bikini athlete model was still against social norms. She decided to focus completely on fitness and left her job. This led to financial crisis; sometimes she sold her furniture or starved for days for her competitions or make up. With a bright smile she says that The Jerai competition boosted her confidence and gave her recognition for her efforts. She believes that this victory convinced her she is on the right path. She accepts the challenges taking a toll on her but she explains that a achievement can be a game changer.

As body building is not accepted by people in India, she said something was still incomplete. She excitedly recalls that winning Roadies 2017 changed the scenario. She was accepted with great warmth by the people of her town. She changed the perspectives of the society by being herself and fulfilling her dreams. She is happy that her parents can now lift up their heads and speak about their daughter’s victories. She exclaims that the city now waits her arrival and follows her on social media pages to know about her upcoming competitions.

We always look upto an icon and we were curious to know her favourites. She undoubtedly answers saying The Rock as she believes he is nothing but the best.

We further asked her the ABC rules for her journey. She believes she did not just have a body transformation but a mental toughness and personality too. She does not shy away from saying she has cried her heart out just to become stronger and firm to support her choices in life. She advises everyone to vent out their emotions as they block us from evolving into a better individual.

There are many myths about fitness and losing weight. We asked her to share her views about this. She explains that skipping meals is a major myth and a well balanced diet is always recommended. Building muscles and picking weights are not the only keys to fitness but just maintain your body and being healthy for yourself will give consistent results. She also says that if girls lift weights they will look like a male is the biggest myth in India. She firmly says building a body for strength is certainly not making you big and male-like.

She has represented India in many international competitions. We asked her to share her experience. She recalls participating in Asian Championship and Ultimate Beast Master Show and getting the Goosebumps whilst representing a complete nation, India. She felt very patriotic, proud and lucky to represent her homeland and would like to do it repeatedly.

Aligning with digitalization we asked her she feels the pressure of social media and how does she cope up with it. She answers firmly by saying she shows who she truly is. She updates her pages constantly. She reveals all is not hunky dory and there are people who negatively comment and she maintains the ethics and ignores them but as an educated engineer she answers back when there is a requirement.

We asked her if cheat days are a part of her regimes. She accepts that Saturday are her reserved cheat days and sometimes she has them twice a week. She also reveals doughnuts as per guilty pleasure.

We were excited to know about her future aspirations. With great enthusiasm she reveals her dream to be a contestant in Khatron ke Khiladi. She explains she has already designed her clothing line and it will be launched soon. She also states that she looks forward to host her own show revolving around fitness, personality, lifestyle and dreams to motivate everyone to step in to live their dreams. She also reveals about her interest in acting and looks forward to acting projects.

With great achievements she influences many so we asked her to share a tip for the audience. She shares two feeling responsible. She points out being consistent as the biggest key in the journey of hard and passion to get closer to the dreams. In fitness she tells everyone to eat to live and not live to eat as fitness cannot be gained overnight without discipline. She wants to promote personalities and not just fitness and shares her famous statement “Do what you want to do, there is nothing that can stop you but you”.

Ms. Shweta Mehta is software engineer turned fitness athlete. She shares about her perspectives on fitness and the process and will to achieve goals we set for ourselves.

As we commenced our interview we asked her to give us a gist about her childhood. She explains that she was a pampered girl as she had three brothers. She has always been a father’s princess and her family always wanted her to be in a secure and comfort zone. They preferred her to choose engineering over medical and she completed her graduation in software engineering in Haryana. She decided to move out of North India to explore more. She has always been adamant about her decisions and always possessed the convincing ability. She further shifted to Bangalore for a job and worked as a soft developer. She maintains that even after moving out of the comfort zone her family is close knit.

​​We further asked her views about fitness before the Jerai Women’s Physique competition, as it was one of her initial wins. She recalls that the definition for fitness was completely different. Eating clean or doing any one physical  activity  with  a  little  of dancing  was  her  mantra  then. She