We were intrigued to know the ideology and relevance of mythology. He told us that generally when religion is spoken about there is high philosophy but common man is always more interested in stories. They like to learn from story-telling. Ramayana and Mahabharata are full of knowledge. He would question people about what they learned from these epic but no one could tell him. They would just tell him there is a lot of gyan (knowledge) in these stories but no one could pen it down it exactly into arts, culture, politics or science. This drove him into asking fundamental questions making him realize Indian stories are different from European stories, Greek stories, Chinese stories showing the difference. He points out that every culture as different story telling format which shapes the way an individual looks at life. No one pays attention to the details but just the academics which should be avoided. To live better we need to learn deeper.

Mr. Devdutt Pattanaik once claimed that society cannot exist without myths, we took the opportunity to ask him to explain in detail. He calmly explains animals hunt for food and reproduce and similarly we are interested in food and reproduction but humans seek meaning and want to make sense of our lives, why are we alive and what is the purpose of the world. Every tribal community in the Amazon forests, the Congos, The Africans, the Australians or the Aborigines have a theory of their own about the beginning of the world, the end of the world and the phase after death. This sums up to humans searching for meanings through cultural stories.

He further explains that an archaeologist carries out excavations and finds remains of a body to label a civilization but he can trace the beginning of a culture only at the site of a burial where the body finds its value and true meaning.

For a better understanding we further asked about the learnings of Ramayana and Mahabharata with relevance to the modern times. He reveals that both the legendary stories tell us that we are bound by our restrictions. Lord Ram is a god but he is restricted by his royal role, Lord Krishna is a god but he is restricted by the role of a charioteer; and no one has absolute power, not even god. He belives no one can change the world bound by rules and regulations. You can work within the system and not change it. Lord Krishna works within the system is the biggest learning. There is no fire or floods in both the stories. There are no instances of any god creating punishments for not following their ways. There are no punishments in Indian stories.

We have been hearing perspectives about Hinduism and Hindutva. So, we wanted to know the true meaning of Hindutva with his perspective. He believes Hinduism began in the early 19th century and consolidated in the 1920s, hence he sums it up to be a 100-year-old idea not a thousand-year-old one. He simply states that the fundamental idea of Hindutva is Hinduism is under threat and it needs to be protected from itself and foreigners. He continued by stating we are constantly in a war zone, we constantly under attack that is what Hindutva about, people say Hindutva Khatremeihai (Hindusim is under threat) and people lash out. It is nothing to do with karma, dharma, moksha, gyan or governance; its focused on that being under threat, someone will attack us and we need to kill them. He says it’s the broad way of understanding Hinduism but no is interested in Philosophy, poetry, culture or art. He further explains that some of us don’t even know what they are protecting.

He further adds that war makes heros and to be heroic you need a war. People start imagining enemies and fighting them. He accepts that the threat surely could be real but, in the world, everything is under threat in terms of all life forms. He sees that we are in a paranoid siege of being under threat; while we speak India and Pakistan we speak more about Pakistan; less about Vedas and more about congruence realizing the interest is least in the Rigveda or scriptures and if at all the scriptures are spoken about its to show superiority. No one sees it for exploring or make an individual’s life better. He says Hindutva is not smart.

As a society we are failing to respect other’s belief. The Mythological author adds to it by saying good human beings respect other human beings and those who don’t are savages. Animals are not interested in other animals but humans are interested in other humans and co-exist and engage with each other. We should aspire to live together peacefully.

The author once said that Saraswati should be outside the closet. We were curious to understand how can we impart knowledge in the society. He said that in a caste-based system knowledge is not shared but locked within the system. It is only passed on the sons and daughters of the family. He explains that knowledge stays within the communities, like potters will teach potters and brahmins will teach brahmins but not each other because of the boundaries we made. He explains that the world has evolved and these boundaries are meaningless now and we must impart knowledge to each other.

With his love for mythology we were curious to know a mythological character which is relevant in today’s world and his inspiration. He tells us it’s a not a mythological character but a legendary one. He clears that the person is not a he but a she, namely Ubhaya Bharati, wife of Mandana Mishra. She made Shankaracharya who had vowed celibacy understand karma Shastra through tantric practice. He believes everyone tries to control everything and men need to learn as they know nothing about relationships.

Hindutva is just a 100 year old idea. The paranoia created to protect hinduism is essentially putting it in a warzone. Explains Industry's No. 1 Mythological Author, Mr. Devdutt Pattanaik. 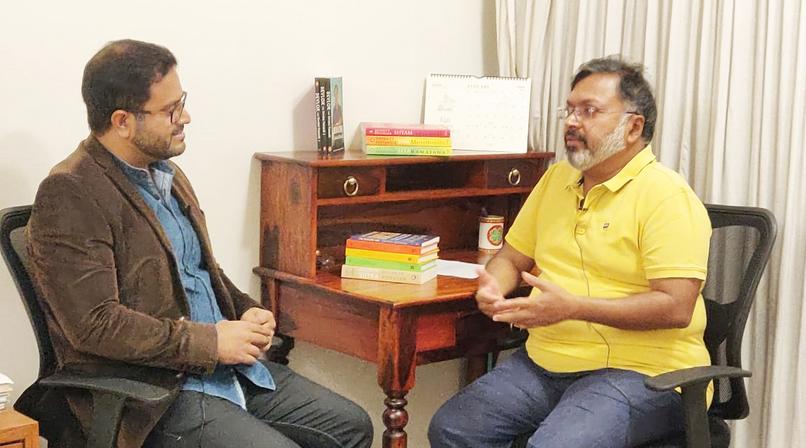 We spoke to Mr. Devdutt Pattanaik about his mythological knowledge and beliefs. He shared with us some perspectives about how mythology helps people learn to live their daily lives.

We began by asking what got him interested in Mythology. He smiled and said that he has been interested for 20 years so he could not pinpoint the exact time but like most children he liked Amar Chitra katha and Sangam Mala. He liked to read deeper unlike his school mates. He began reading academic mythology just for knowledge which gradually turned into passion.

We asked him about his journey and he told us that he began with studying medicine. He believes that mythology was a part of his life then but he wasn’t conscious of it. He then joined the pharma industry. He would earn in the week through his pharmaceutical job and research on mythology, write articles, publish them and he also published a book at the same time. He experienced the transformation of growing into a better manager in the pharmaceutical industry with the help of his mythological knowledge. People enjoyed having long conversations with him. He would explain them things using stories of Ramayana and Mahabharata. This created a buzz in the market and his friend suggested him to practice mythological writing full time in 2008. Past 10 years he has been writing and researching about Pure Mythology and Applied Mythology.