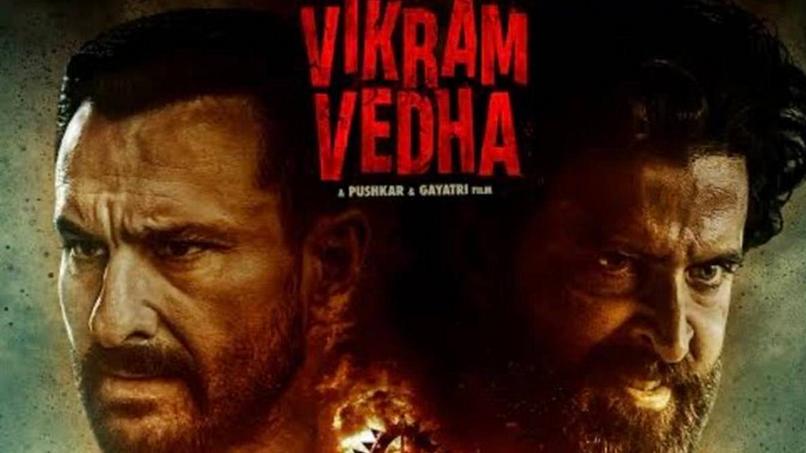 Once again recapitualising the rich folklore of our country, the movie Vikram Vedha is built on subtle references from the ancient story of “Vikram -Betaal”, the Righteous and committed King who would never budge even an ounce from the path of truthfulness and conviction & Betaal-the ghost spirit who will delve deep into the layers of complexities of human behavior and criminal psychology. The never ending tussle between them with Betaal seeking answers to the tales he told and Vikram, as usual always the one to respond with swift action. Here, the warrior king gets replaced by the honest Police Officer, Vikram (Saif Ali Khan) and the ghost spirit Betaal is conveniently replaced by the gangster and criminal, Vedha (Hrithik Roshan) who is always at daggers drawn with the law.

Enduring a complex tale of crossing pathways and chasing one another, Vikram and Vedha are always embroiled in a mess. The death of Vedha’s brother Shatak (Rohit Saraf) and his love interest, Chanda (Yogita Bihani) leads to Vedha being extremely vengeful and vindictive. The movie raises several questions on the psychology of crime: What leads to crime and actually gives rise to intention of it? Can a criminal be forgiven for the crime he committed? It offers a plenty of scope to analyze the mindset of a criminal character.

Though the movie is not about being sympathetic towards the criminal but actually trying to figure out why he is like that in the first place? Saif Ali Khan as the honest Police Officer faces a narrowing dilemma as his lawyer wife, Priya played by Radhika Apte fights for Vedha. She once refuses to give a clue to Vedha’s hideabouts which leads to Vikram being enraged and raiding several locations and finally finding out Vedha. Hrithik Roshan has aced the character as usual, not only with the “desi” anti-hero look but also with his “Awadhi” accent. He looks quite convincing as the threatening criminal and carries out his role with aplomb.

Saif Ali Khan as Vikram is also equally good matching Roshan’s acting pace by pace. With these two star performers and superb actors the movie is worth watching for their dialogue deliveries and action sequences. The supporting cast of Rohit Saraf and Yogita Bihani lends a fresh feel to the dark and intense movie, the director duo, Gayatri- Pushkar have not gone wrong in their choice of the lead characters  as well as the supporting cast. Radhika Apte does justice to her role of the lawyer wife torn between her loyalty to her husband & her commitment to her profession.

Musical score by Vishal Shekhar also does not disappoint though and the overall excitement to watch two great actors and performers together has caught the fantasy of the average cine-goer. As of 2nd October, the film grossed Rs. 37.59 crore in India and Rs. 20.1 crore overseas. The film definitely is a star in the kitty of Hrithik Roshan who as always manages to enthrall and regale the audiences with his superb performance. He is definitely India’s answer to the Hollywood top brass and has all what it makes to be an International Actor. It is a must watch for all die-hard Hrithik fans.