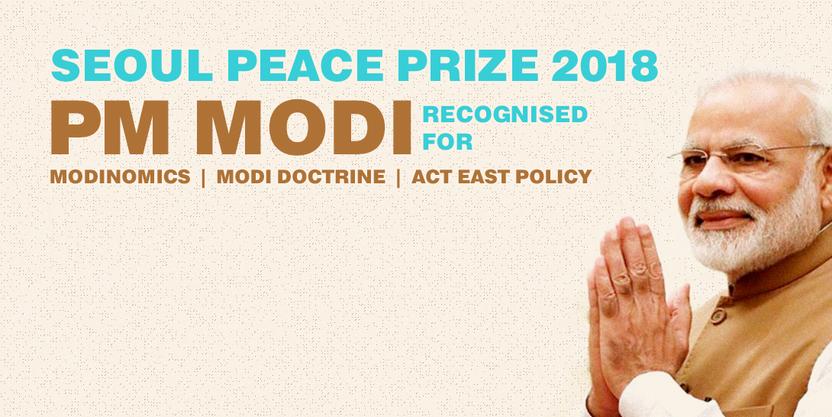 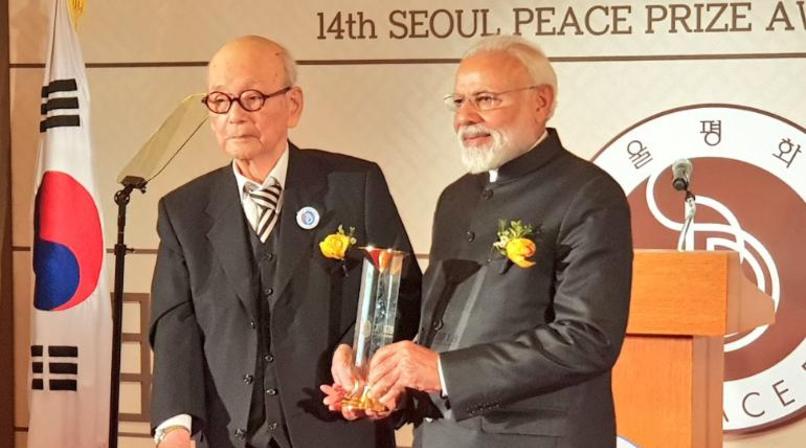 The Committee also credited the Prime Minister for his contribution towards regional and global peace through a proactive foreign policy with countries around the world under the Modi Doctrine and the Act East Policy. Expressing his gratitude and in light of India's deepening ties with South Korea, Modi accepted the award, the presentation of which would take place at a mutually convenient time.

Modi has received the award for three key points like Modinomics, Global-cooperation and anti-corruption for which is efforts are very evident and it makes him the perfect candidate to be awarded.

Established in 1990, the Seoul Peace Prize recognises those who made great contributions to the harmony of mankind, the reconciliation between nations and world peace on the basis of the ideals of the 24th Seoul Olympic Games held in Seoul, Korea in 1988 in an atmosphere of friendship and harmony of the peoples around the world.

Modinomics earns our PM the Seoul Peace Prize 2018. He is the first Indian recipient of the award, for his contribution to high economic growth to India and the World.

Prime Minister Narendra Modi has been named as the recipient of 2018 Seoul Peace Prize, a biennial award instituted to crystallise the wishes of the Korean people for peace on the Korean Peninsula and the rest of the world.

According to a statement issued by the External Affairs Ministry on Wednesday, Modi has been awarded "in recognition of his dedication to improving international cooperation, raising global economic growth, accelerating the human development of the people of India by fostering economic growth in the world's fastest growing large economy and furthering the development of democracy through anti-corruption and social integration efforts".

After assessing over 100 candidates proposed by over 1,300 nominators from around the world, the Award Committee decided to bestow the Award on Modi, calling him "the perfect candidate", according to the statement. "The Award Committee recognised Prime Minister Modi's contributions to the growth of the Indian and global economies, crediting 'Modinomics' for reducing social and economic disparity between the rich and the poor," it said. The Committee lauded PM's initiatives to make the government cleaner through anti-corruption measures and demonetisation.