“I couldn’t do any straightforward stories with songs and dances, for me that’s a musical!” reveals Mr. Shyam Benegal the founder of Parallel Cinema and the legendary copywriter turned Film-Director.

We had the opportunity to spend an afternoon with Mr. Shyam Benegal, the founder of Parallel Cinema who shared insights about his career and cinema trends with Herald Global.

We commenced the interview with asking him about his legendary journey from being a copywriter to a Film-Director. He smiled and explained that he began as a copywriter and an account executive in his early days. He later joined the film department where he wrote scripts for films. Further he became the head of the film department. He continued making advertising films and about 60-70 films a year. He believed it was a training which he wouldn’t have received by joining a course for film-making. He made around 300 films in three and half years.

He changed his job and wrote films of his own. The film division was looking for fresh talent who could write and make films. Following this, one thing led to another and he decided that this was his calling! He gave up his advertising job and became a full time Film-maker. 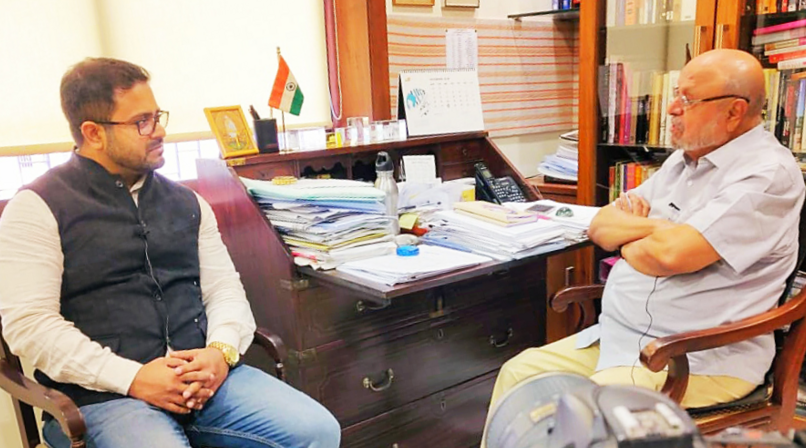 As he is famously known as the founder of Parallel Cinema we were curious to know the idea of creating such unique content. He replied saying that in the conventional film Industry he wasn’t oriented or brain-washed into making the regular story. He believed that cinema for a long period of time worked on a formula of having a story with songs and dances although the story may not have needed any of it. He also accepts a movie at that time wouldn’t sell without songs and dances.

He said that for him a movie with song and dances was a musical. He could be convinced into making straightforward realistic movies with songs and dances or even melodrama. He wouldn’t imagine any social content with songs.

He shared with us that there was company in his advertising days who had a monopoly of distributing films, with 800-900 cinemas under their control along with many theatres. He had good relations with them and ended up making his first feature film for them, where his distributors became his producers with a restricted small-scale budget. That in turn created a discipline and also first huge success.

He happily shares that it turned out to be exactly the way he visualized it. He further made his second film and the third which created a chain of success. He delivered films with stories he wanted which led him to give up advertising.

Working with talents like Naseerudin Shah, Smita Patil, Om Puri, Shabana Azmi; what was the thought of bringing their work to the table. He took us back to the 1960s and said that being the second largest cinema producing country in the world there was no formal film education in India. In 1961, the Government of India decided to introduce course for acting. Many artists were theatre actors. Having theatre skills was not enough for film acting, hence they had to take up the short film course for training themselves. Naseerudin Shah and Shabana were new talents but not stars. His movies did not have heros and villains. He explained it he made real stories and big established actors wouldn’t act in his films. Hence the break given to them brought out their talent in mutual needs. He ended up with best talent and great performances with them. His stars won awards making his films better creating a historical moment with their great contribution.

Speaking about casting, we asked about the idea of casting Karishma Kapoor, a commercial actress of that time for Zubeida raising eyebrows, as it wasn’t his style and the movie still ended up having a great response. He replied that Karishma Kapoor was a big actress and star growing by the day and he asked her if she would like to work in the movies of his style and he expressed her mother being even more happy with this offer. He stated that she accepted that offer as it was adding to her versatility as an actor.

We asked him his inspiration for achieving such great heights. He said that he hasn’t had any such eureka moment as it differs from person to person. He just sticks to saying it was purely always working and making films with ideas he stood for.