We think this could translate into oversize flared pants (like Styles frequently wore on tour last year), sequins and sparkles from head to toe (like Lady Gaga, another of the event's co-chairs, has been known to wear), or even a complete look with each piece labelled, à la Off-White by Virgil Abloh. After all, another of Sontag's definitions of camp is: "Camp sees everything in quotation marks. It's not a lamp, but a 'lamp'; not a woman, but a 'woman.'”

Forty-eight per cent of the guest list comprised actors, including Emily Blunt, who wore a custom Michael Kors look comprising 510,000 sequins; Tracee Ellis Ross, who was transformed into a literal work of art by Jeremy Scott; and Rachel Brosnahan, who wore an Erdem dress that was an acidic tribute to cross-dressing and Italian aristocracy. Fashion, meanwhile, represented 32 per cent of the 2019 committee, as Tom Ford, Donatella Versace, Miuccia Prada, Pierpaolo Piccioli and Clare Waight Keller all bought tables.

Featuring some 200 fine art and fashion objects, the contents of the exhibition trace the origins of the subject from the 17th century, specifically the court of Versailles, to the present day. “Basically, we go from sun kings to drag queens,” American Vogue editor Anna Wintour said at a press conference in February. A preview of the Johnny Dufort-lensed catalogue indicated that looks from Moschino’s spring/summer 2017 collection, Gucci’s autumn/winter 2016 offering and Off-White’s pre-fall 2018 edit feature within the walls of the Met. That Marjan Pejoski swan dress sits in the display cases alongside a fabulous Schiaparelli flamingo ensemble. And there are myriad Jeremy Scott – “the king of camp” – pieces to add character to the proceedings.

Gucci creative director Alessandro Michele said: “This is a very important moment because we will collaborate on the creation of this fantastic exhibition that has a DNA that is related to my work, working to the expression of human nature... Camp is a beautiful word.” Michele also paid tribute to Karl Lagerfeld, adding, “I would like to seize this opportunity to thank Karl, who is no longer with us, who has been a great representative of fashion, and who had a great love for life and this kind of work.” 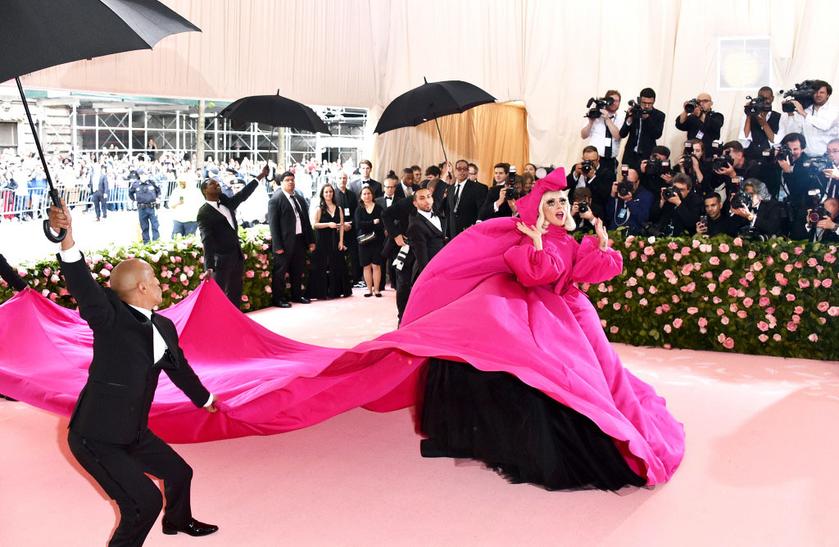 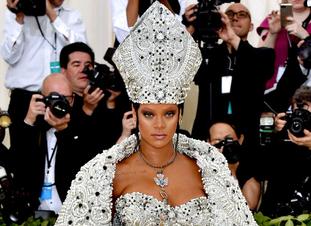 The Costume Institute Gala at New York's Metropolitan Museum of Art is the biggest event on the fashion fundraising calendar. Founded by publicist Eleanor Lambert, the benefit was first held in 1948 to encourage donations from New York's high society. In its modern incarnation, the most famous faces from the realms of fashion, film, music and art come together to raise money for the Met's Costume Institute and celebrate the grand opening of its latest exhibition. The night is centred on the theme of the new exhibition, with previous themes encompassing everything from Heavenly Bodies: Fashion and the Catholic Imagination, to Manus x Machina, Punk: Chaos to Couture and China: Through the Looking Glass. This year's exhibition theme is Camp: Notes On Fashion.

The 2019 Met Gala, fashion's biggest night of the year, will be ostentatious, flamboyant, and everything else the theme demands. It is camp, after all. The theme is "Camp: Notes on Fashion," based on Susan Sontag's 1964 essay "Notes on 'Camp.'" And on a night that already promises to deliver the most incredible fashion you could wish for, we have high hopes for what we might see.

Since 1995, the event has been chaired by US Vogue editor-in-chief Anna Wintour, who enlists public figures to serve as her co-chairs. Past hosts have included Beyoncé, Taylor Swift, Katy Perry, Amal Clooney and Rihanna. The Met Gala 2019, which marks the event's 71th anniversary, was co-chaired by Lady Gaga, Alessandro Michele, Harry Styles and Serena Williams.

So what is camp, really? In Sontag's essay, she provides 58 definitions for camp. Among them is "The hallmark of Camp is the spirit of extravagance. Camp is a woman walking around in a dress made of three million feathers." And for a gala and collection that's underwritten by Gucci, a fashion house that has built its success in recent years on being over the top yet cool, camp makes complete sense.

Alessandro Michele, Gucci's creative director and one of the co-chairs of the 2019 Met Gala, told Vogue that Sontag's essay "perfectly expresses what camp truly means to me: the unique ability of combining high art and pop culture."

While at the helm of Gucci, Michele has sent models down the runway carrying mannequin heads and toed the line of androgyny with his menswear and women’s wear, all hallmarks of the over-the-top nature of camp itself. And Gucci's resident poster boy Harry Styles is fittingly also co-chairing the Met Gala. The musician is well-known for not just wearing Gucci's flashy suits with sparkles and bell bottoms but all other sorts of prints and ruffles.

Andrew Bolton, the curator in charge of the Costume Institute, told Vogue that camp "has become increasingly more main stream in its pluralities — political camp, queer camp, Pop camp, the conflation of high and low, the idea that there is no such thing as originality." Camp can possibly be traced back to the French term se camper, which means to pose exaggeratedly.

It evolved into taking on a meaning of being effeminate, when cross-dresser Frederick Park wrote a letter and referred to his ‘campish undertakings.’ Camp grew to become the "love of the unnatural," Sontag wrote in the Partisan Review, and now it encompasses everything flashy, ironic, and cool — but not cheesy or kitschy.

Bolton pointed out that "Camp really means the unique ability of combining high art and pop culture," rather than something frivolous that can be ignored. It all boils down to one word for Bolton: surplus. It's about going over the top just enough to make a statement but not so over the top that you've jumped into the kitschy category. 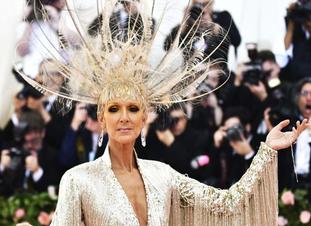 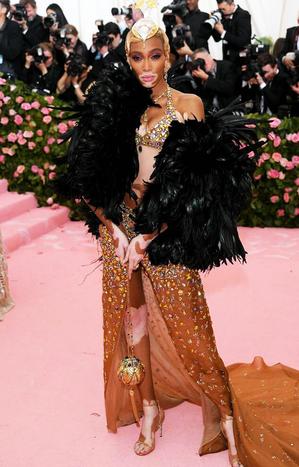 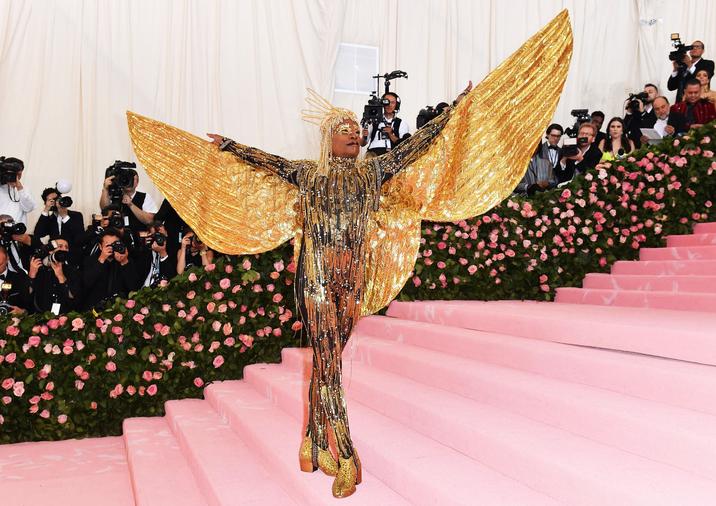 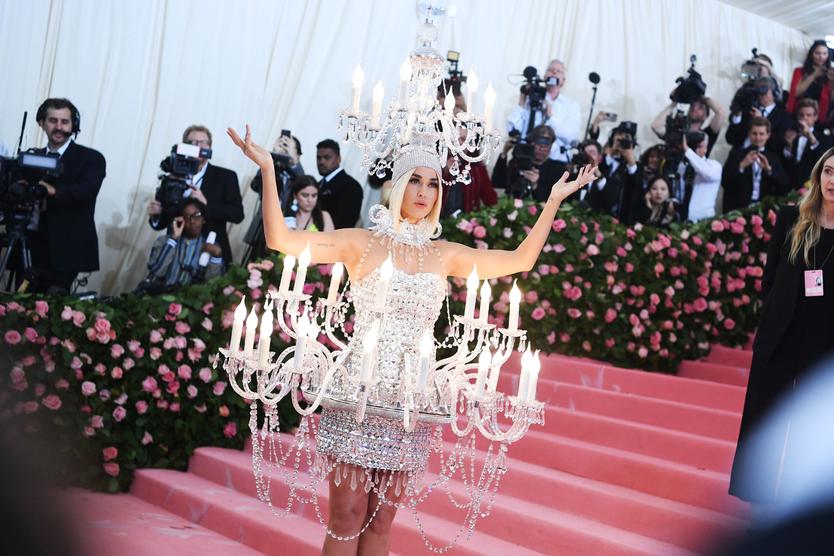 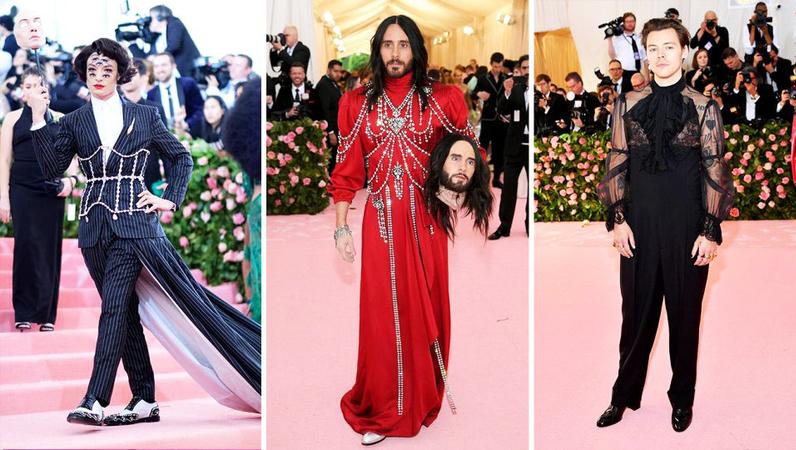 11. Jared Leto did the damn thing and he did it all the while holding a Gucci recreation of his own head. Biblical!

12. Cardi B gives us the grand camp finale that we wished for. Designer Thom Browne created a fantastical red feathered gown with an extra large (and round) train. Little mermaid lobster goals.

13. Lady Gaga and Katy Perry are the unofficial queens of modern camp, but now that we've seen this lavender Versace number on Kylie Jenner, we're thinking that they've got some serious, fluffy competition.

14. We'll always love this. J. Lo chaneled Whitney Houston in The Bodyguard with this diamond-encrusted headpiece and matching fringe body-con gown. It's safe to say that we all want to be A.Rod right now.

15. Gucci Creative Director Alessandro Michele and Met Gala co-host Harry Styles look like they’re walking into the most elevated semi-formal that we could ever hope for.

16. Stepping out of the ocean and onto the red carpet is the official Kim Kardashian-West way to do the Met Gala. Sporting wet hair, KKW wore designer Thierry Mugler's first design for his eponymous label in 20 years.

17. Let's get one thing straight: Billy Porter knows how to enter a room. Carried in Cleopatra-style on an Egyptian throne built for a queen, this custom gold look by The Blonds, complete with wings, might just have won the carpet.

18. Are you even real, Serena Williams? The record-breaking tennis wonder and Met Gala co-host really can do it all — and even better, she does it in Versace. And sneakers.

19. Priyanka Chopra Jonas chose a Christian Dior gown with a caged headgear whereas her husband, American singer-songwriter Nick Jonas went for a white Dior suit. Chopra finished off her look with frothy curls, grey painted eyebrows, eyes lined with white eyeliner and an Indian twist – white bindi. Twitteratti called her a high fashion Mad Hatter from Alice in Wonderland and Jonas as her rabbit. Designers back home loved her look and gave her extra points for her eccentric style.

20. After channelling her inner Barbie at the Met Gala 2019 pink carpet, Deepika Padukone continued the fashion exuberance at the exclusive after-party. 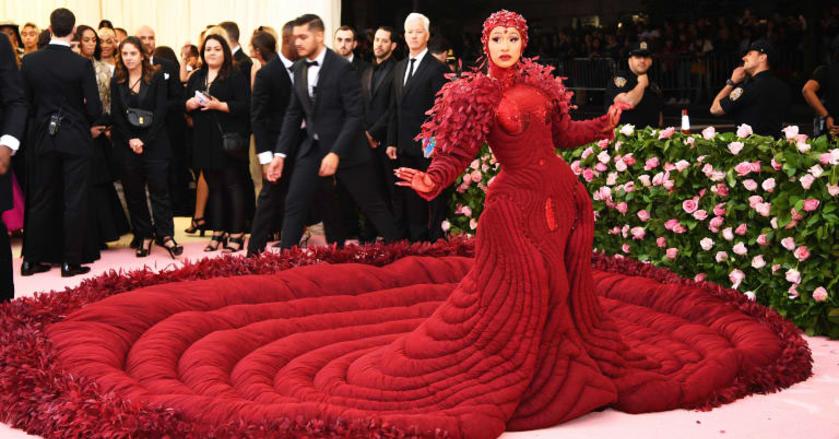 The Best Caught our eyes:

1. Among the first to arrive, co-host and queen of camp Lady Gaga really, really made an entrance. Not only did she show up in a next-level hot pink parachute coat, of which was custom made for her by designer, Brandon Maxwell, she casually stripped down — on the pink carpet — into the ultimate LBD

3. Ezra Miller delighted on the pink carpet in a custom Burberry pinstriped suit. Unlike all of the other suits that hit the Met steps, this one came with an exaggerated cape and studded corset. To further solidify the look? Five extra eyes for optimal exhibition viewing.

4. Extravagant headpieces and feather boas are the go-tos for the camp theme. Winnie Harlow stuns in a gold ensemble that bares much. Inspired by the Caribbean Carnival, she’s the peacock queen of space.

5. Celine Dion might've been confused by the theme at first, but as per usual, she pulled it off with flying colors in a 22-pound, hand-stitched fringe bodysuit, courtesy of Oscar de la Renta.

6. Awkwafina returned to the scene of the crime a year after robbing the Met Gala in Ocean's 8, this time donning a crinkle cut gold gown by Altuzarra.

7. Despite nearly taking out master runway walker, Kendall Jenner, this Cher-inspired custom gown by Versace is only adding to our love of neon, well, everything.

8. In honor of Elton John's new flick, Rocketman, Gigi Hadid arrives alongside designer Michael Kors in a chromatized rendition of the beloved Brit, including a cape and platform boot combo — plus a headdress.

9. Daenerys is cool and all, but after seeing Saoirse Ronan don this dragon-esque Gucci frock on the pink carpet, we can't help but think that there's a new Mother of Dragons. Dracarys.

10. Katy Perry couldn't just let Lady Gaga out-stunt her, could she? Wearing a Beauty and the Beast-inspired Moschino dress stacked with a fully-lit up chandelier headpiece, she's giving the co-host a run for her money. 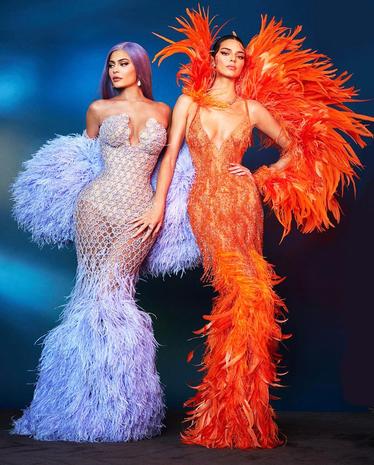 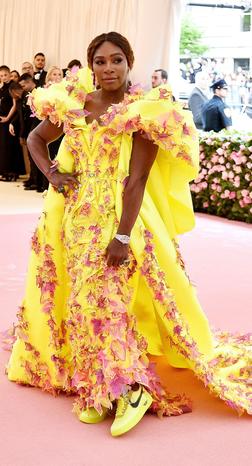 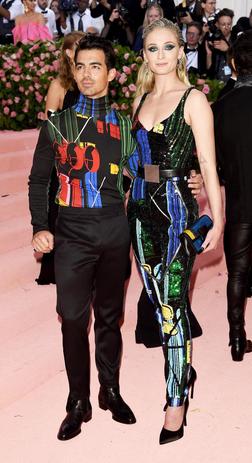