Released on August 28, 2020, the show Masaba Masaba had first caught attention in a snippet of its trailer. The young fashion designer and (a talent house of an actor) Masaba Gupta was in a fabric store where the shopkeeper insists that a ‘Masaba print’ is an imported fabric from somewhere in Africa. At first, one must admit, it’s quite confusing whether the show was a biopic, a document-series or fictional content. The trailer did not make it very clear. Yet, barely a few minutes into the show and these questions were the last thing on my mind as the super talented, unconventional yet relatable mother-daughter duo Neena Gupta and Masaba gave us a glimpse into their lives in this pleasantly refreshing series.

The show revolves around fictionalised versions of mother-daughter duo, Masaba and Neena Gupta, but heavily inspired by their own lives. The show touches upon the personal journey of Masaba and Neena – the former’s divorce, the latter’s attempt to get her due respect and significant roles in the industry, for instance. Rytasha Rathore is endearing as Masaba’s best friend Jia Irani, Pooja Bedi’s character as Masaba’s life coach is an exaggeration to the T and Shibani Dandekar is quite convincing as an artist, although hers is only a very small appearance among other celebrities like Farah Khan, Malavika Mohanan, Gajraj Rao, Mithila Palkar, etc. – all of whom appear as themselves in the series. Writer-director Sonam Nair could have avoided using the stereotypical gay designer trope, yet, there are more wins in the series than flaws.

What makes Masaba Masaba really shine is that it is an excellent example of women telling women’s stories. Sonam Nair and writers Punya Arora, Nandini Gupta, and Anupama Ramachandran have the mother-daughter duo carrying themselves with effortless ease, while telling their story in a relatable way. Crises in the plot such as the one where Masaba has trouble finding a house for herself as a single woman, as well as her expression of wanting a home just for herself was instantly relatable to me as a young woman who has lived on her own for many years.

While the show revels in the idea of a ‘hot mess’ (which is incidentally the theme for Gupta’s latest line in the show and otherwise) and how that necessarily isn’t a bad thing, the show itself is far from being a mess itself.

The show highlights how both Neena and Masaba started off again: the former who continued to strive for significant roles in cinema and Masaba, as a woman in her thirties, navigating life after her divorce. In a country where women are pressured to not step out of stereotypical moulds, both Neena and Masaba are shown making brave choices. While the mother continues to stay in Mumbai, away from her husband, so she could be available for opportunities in good cinema, Masaba stops pretending to be in a happy marriage and does not give up after the launch show of her new collection fails to impress.

Although the penultimate episode involves a chaotic cruise with seasick models and falling pieces of the ramp, making it reminiscent of contrived Bollywood comic endings, the story redeems itself with the ending where Masaba and a younger version of herself come together at the end of a busy season in the world of fashion. Masaba Masaba wears its message loud and clear: It is never too late to start over (and unlike what they say, it need not always involve a guy). 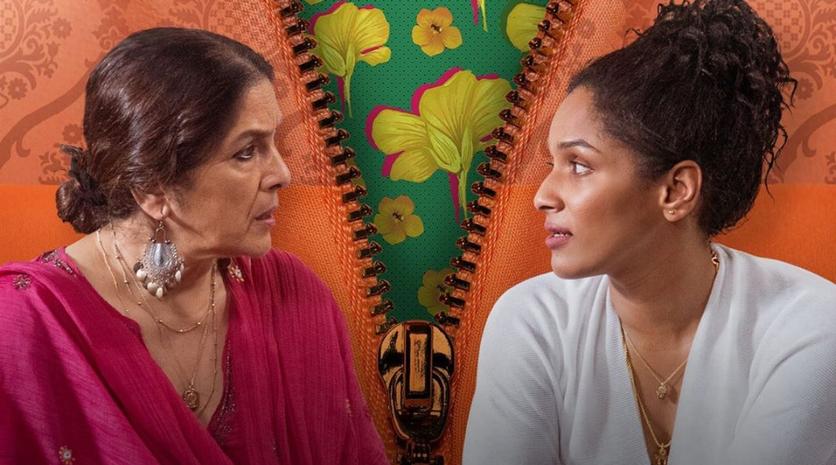 Masaba Masaba – It’s never too late to start over