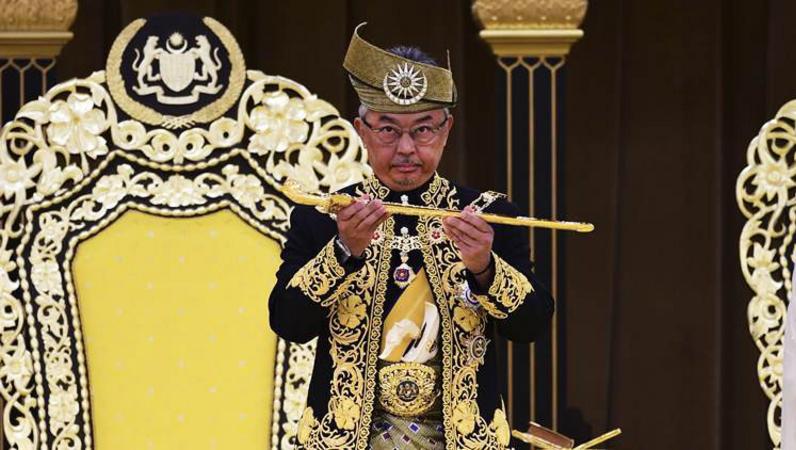 Portraits of the king and queen adorn government buildings throughout the country, together with portraits of the prime minister. The king is also the symbolic head of Islam in the nation, as well as the nominal chief of the military.

In his coronation speech, Sultan Abdullah warned that any attempt to sow racial discord in the country was akin to “playing with fire that will burn not only oneself but also burn down the whole village.

Unity and national harmony are the country’s pillars of strength. Do not ever stoke racial misunderstanding by raising matters that can threaten national unity and harmony,” he said.

A large number of ethnic Malay Muslims, who make up about 60 percent of Malaysia’s 32 million people, still support the opposition. While carrying out economic and institutional reforms, Mahathir’s multiethnic alliance has to quell fears among Malays that their privileges under decades-old affirmative action that favors them in jobs, business and education will be eliminated.

Mahathir in his speech acknowledged minor incidents of racial strife and said the government has set up an advisory body to strengthen racial unity. He said the government will step up efforts to bolster the economy and fight corruption to ensure that “no one is above the law.”

Known as the Yang Di-Pertuan Agong, or He Who Is Made Lord, Malaysia’s king plays a largely ceremonial role, since administrative power is vested in the prime minister and Parliament.

The monarch is highly regarded as the guardian of Islam and Malay tradition, particularly among the Malay Muslim majority. He is also the nominal head of the government and armed forces.

All laws, Cabinet appointments and the dissolution of Parliament for general elections require his assent. The king also issues pardons for criminals. 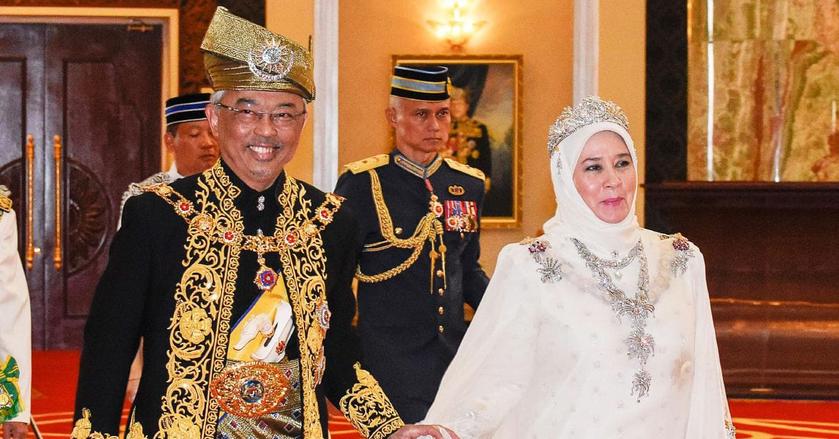 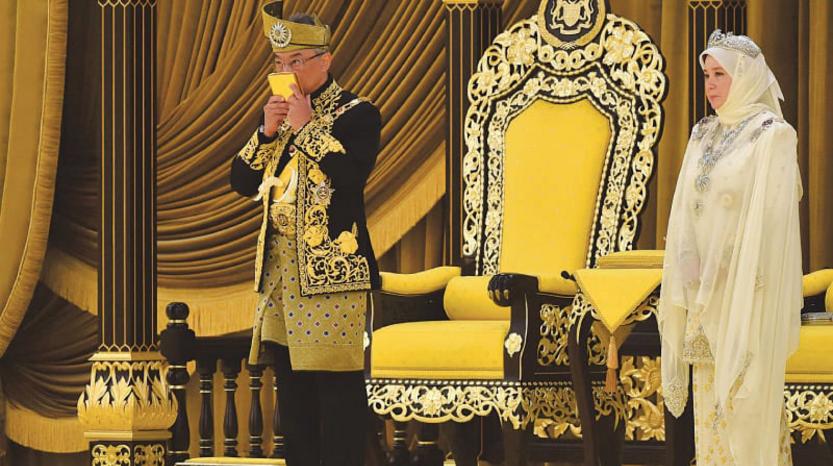 Under Malaysia's unique Constitution, the rulers of the nine Malay royal houses take turns to be elected every five years as the country's constitutional monarch. The ceremony, held in the palace's throne room, was attended by members of Malaysia's nine royal houses dressed in full regalia, and local political leaders including Prime Minister Mahathir Mohamad. The ceremony began in the morning with a royal salute involving members of the Malaysian Armed Forces at the main square of Istana Negara.

It was followed by the arrival of Sultan Abdullah and his 58-year-old consort, Tunku Azizah Aminah MaimunahIskandariah Sultan Iskandar, the new Queen.

The new king yesterday wore a black bajuMelayu - a traditional Malay outfit - intricately woven with gold thread, along with a tengkolok, the traditional headgear worn by Malay men. His outfit was accessorised with a keris, a Malay dagger that symbolises power.

Upon completion of the inspection, Sultan Abdullah was accorded a second royal salute.

In his maiden speech as Agong, Sultan Abdullah urged Malaysians to refrain from raising matters that can undermine and destroy the country's harmony, stressing that unity and harmony are pillars of strength of the nation.

"It is the basis of unity, of bringing the people together and of sparking the spirit of patriotism. It is a spirit that, if inherited and cherished by every single citizen, can bring forth a sense of love and loyalty to the country," Bernama quoted Sultan Abdullah as saying.

"Playing with fire will burn not only oneself but also the whole village," he warned.

Sultan Abdullah's predecessor, Sultan Muhammad V of Kelantan, stepped aside in January after just two years on the throne after he went on medical leave. Reports then surfaced that he had married a former Miss Moscow beauty queen.

No official reason was given for the abdication, the first time a Malaysian king had stepped down before the end of his term in the Muslim-majority country.

Pahang was next in line for the throne after Sultan Muhammad V stepped down and Sultan Abdullah was formally chosen as the country's 16th king by the other eight royal families.

Despite the merely ceremonial role, Malaysia's Malay-Muslim royalty generally commands great respect, especially from the Malays, the country's majority group, with criticism against them strictly forbidden.