After the collapse of the Soviet Union, Russia slowly and smoothly recovered and became one of the largest European retail markets globally for the Western companies that stepped up their presence in the country.

Russia’s invasion of Ukraine has turned into the largest ground war on European soil since World War II. Along with causing immense loss of human life and destruction across many of Ukraine’s cities, it is blustering the global economic landscape and causing many of the world’s largest companies to pull out of Russia as the country increasingly becomes a global outcast.

While there are some companies that completely withdrew their operations in Russia, some have either suspended their operations or scaled back on their production and sales in the ‘outcasted’ country.

Here is a list of companies that have scaled back or cut ties with Russia.

Airbnb- The online housing service said it had paused all operations in Russia and its close ally Belarus. It also announced that its non-profit arm would offer free shelter to up to 100,000 people who have fled Ukraine because of the invasion.

Amazon.com- Amazon’s cloud division, Amazon Web Services, said it would halt new sign-ups for the service in Russia and Belarus.

Google (& YouTube)- Google owned YouTube has blocked mobile apps connected to Russian state-funded publisher RT from its news-related features, and has also barred RT and other Russian channels from receiving money for advertisements.

Apple- The American technology giant has stopped all its product sales in Russian markets with a company spokesperson adding that Apple Pay and other services have also been stopped along with its e-commerce platform.

Microsoft- The company said it was suspending all new sales of its products and services in Russia.

Hitachi- With the exception of products, services and support for electrical power equipment that are indispensable to the daily lives of people, Hitachi has paused exports to Russia and suspended all manufacturing units in the country.

Nintendo- The switch console maker has suspended its operation in Russia and temporarily set its online store on ‘maintenance mode’.

Intel- Intel has stopped all shipments to Russia and Belarus.

Meta- Formerly known as Facebook, blocked access to Russian state-controlled outlets across the European Union after it received requests from a number of Governments and the EU.

Nissan- Nissan has suspended the export of vehicles to Russia and added that it "anticipates that production will stop soon at our plant in St. Petersburg."

Volkswagen- The company has stopped production of vehicles in Russia and has suspended exports to the Russian market.

Toyota- Toyota has announced it would stop making cars in Russia or importing them to the country "until further notice, due to supply chain disruptions."

Ford- Ford has suspended all its operations in Russia.

Mercedes-Benz- The German carmaker has opted for legal options to divest its 15% stake in Kamaz as quickly as possible.

Boeing- A company spokesperson confirmed the aircraft maker was pausing parts, maintenance and technical support services for Russian airlines and suspended major operations in Moscow and temporarily closed our office in Kyiv.

Jaguar Land Rover, General Motors, Aston Martin and Rolls-Royce are among the car-makers that have halted deliveries of vehicles to Russia due to the conflict, while construction equipment manufacturer JCB has paused all operations.

Goldman Sachs- It became the first major Wall Street bank to announce plans to exit Russia after the invasion of Ukraine. "Goldman Sachs is winding down its business in Russia in compliance with regulatory and licensing requirements," a spokesperson said.

JPMorgan Chase- America's largest bank, said it is "actively unwinding" its Russian business and not pursuing any new businesses in the country.

American Express- The company spokesperson said in a statement that globally issued American Express cards will no longer work in Russia, and cards issued in Russia won't work outside the country.

Visa- Visa said it is suspending all of its operations in Russia. It will end all Visa transactions within its borders, and Visa cards issued in Russia will no longer work outside of the country.

PayPal- "The PayPal community will remain steadfast in our humanitarian efforts to care for those in Ukraine who are experiencing devastating violence and tragic loss," CEO Dan Schulman said, announcing the suspension of its services in Russia.

Mastercard- The company said it was suspending its network services in Russia. Cards supported by Russian banks will not work in the company's network, and any cards issued outside of Russia will not work within the country.

The Big Four accounting groups - Deloitte, KPMG, EY and PricewaterhouseCoopers (PwC) have said they will no longer have a member firm in Russia because of the invasion. Top-tier law firm Freshfields also said it will no longer work with any clients linked to the Russian state either.

Ikea- The world's largest furniture company has closed its 17 stores in Russia. The company said the conflict is having a "huge human impact" and is "resulting in serious disruptions to supply chain and trading conditions."

Estée Lauder Companies- Estée Lauder, whose brands include Michael Kors, DKNY, Clinique and Bobbi Brown, has had a presence in the country for about 30 years. Russia was where it had some of its strongest sales. The company has ceased its sales in the country.

Crocs- The company said that it will “pause its direct-to-consumer business, inclusive of e-commerce and retail operations, in Russia." It will also pause "the importation of goods into the country."

Puma- German sports company Puma said it is suspending operations of all of its stores in Russia. The company operates more than 100 stores in the country.

Inditex- Zara-owner Inditex, which has 502 stores in the country, has already suspended sales in Russia, citing "tragic developments" in Ukraine.

Adidas, L’Oreal, Burberry, Chanel, Uniqlo, Mothercare & Prada are also some of the luxury retailers that have suspended sales and temporarily shut stores in Russia.

Coca-Cola- The company said that it is "suspending its business in Russia."

Heineken- The brewer announced that it would "take immediate steps to ring-fence" its Russian business, "to stop the flow of monies, royalties and dividends" out of the country.

AB InBev- The maker of Budweiser and other beer brands, said it has "requested the controlling shareholder" of its Russia operations to suspend the license for the production and sale of Bud in the country.

Starbucks- CEO Kevin Johnson said that "we have decided to suspend all business activity in Russia."

PepsiCo- The company said it is suspending the sale of Pepsi and global beverage brands in Russia, but will continue to sell some of its essential products.

Food companies like Nestle, Mondelez, Procter & Gamble and Unilever have halted investment in Russia, but said they would continue providing essentials.

John Deere- The world's largest agriculture equipment maker, has halted shipments of its products to Russia.

Caterpillar- "Operations in Russia have become increasingly challenging, including supply chain disruptions and sanctions," the manufacturing giant said in a statement.

Shell- The multinational oil and gas giant said it would exit all Russian operations, a permanent move, as opposed to a pause in operations.

Exxon- Exxon has pledged to leave its last remaining oil-and-gas project in Russia and not to invest in new developments in the country.

Hyatt- Hyatt said it continues to "evaluate hotel operations" in Russia while complying with sanctions and US government directives.

Hilton- The hotel company announced that it has shut down its corporate office in Moscow and is suspending all new development activity in Russia.

Marriott- Marriott has closed its corporate office in Moscow, and paused the opening of upcoming hotels and all future hotel development and investment in Russia.

WarnerMedia- WarnerMedia has paused all new business in Russia, ceasing broadcast of its channels, halting all new content licensing with Russian entities, and paused planned theatrical and games releases.

Walt Disney- The entertainment has suspended the release of its theatrical films in Russia, citing "the unprovoked invasion of Ukraine." It had films like Marvel's Doctor Strange in the Multiverse of Madness and Pixar's Lightyear set to release this year.

Sony- has halted all software and hardware shipments, and temporarily suspended orders on its online PlayStation store in Russia.

Netflix- The subscription streaming service based in the US has paused all new projects in Russia. Filming for the production of Zato - a Russian language series has also been halted.

Spotify- Spotify spokesperson said it has closed its office in Russia ‘indefinitely’ and restricted shows ‘owned and operated by Russian state-affiliated media.’

The economic fallout from this conflict is wide-ranging because of both countries’ importance to the commodity markets. Ukraine and Russia are both global leaders in production of food commodities, including wheat and sunflower oil.

Russia is also one of the largest oil producers, behind the United States and Saudi Arabia. America has banned Russian oil and other energy exports. 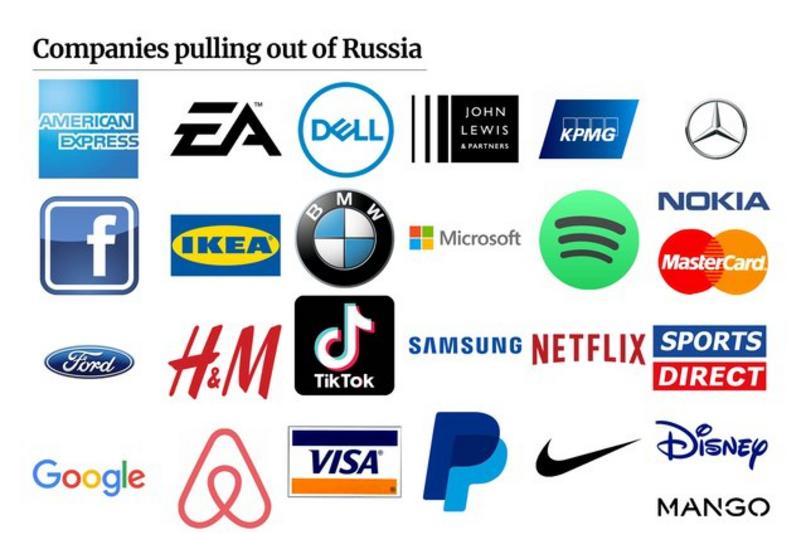 Which companies have pulled out of Russia?