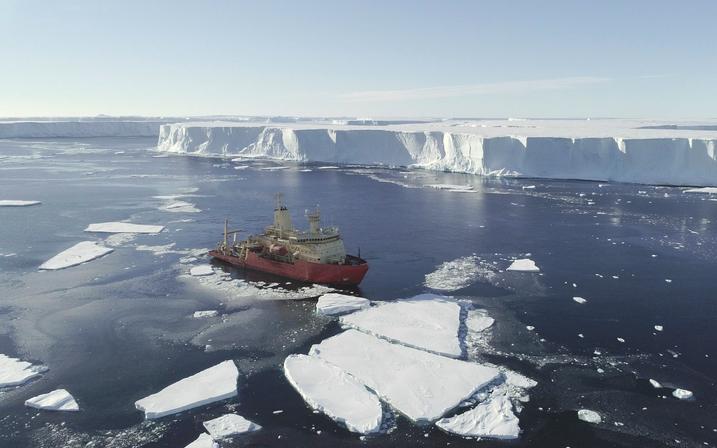 Scientists at the American Geophysical Union reported that a critical section of the keystone Antarctic glacier, Thwaites Glacier, will likely collapse in the next five to ten years. The research, led by Erin Pettit of Oregon State University, predicts that the Thwaites ice shelf will break apart within the next decade because of startling increases in surface fractures and rifts. Up until now the floating section at the outlet of Thwaites Glacier into the ocean, called the ice shelf, has been relatively stable, but the scientists say it could “shatter like a car windscreen.”

The Thwaites glacier is one of the fastest changing glaciers in Antarctica, contributing as much as four percent of global sea level rise today. The huge, Florida-sized glacier – also known as the “Doomsday glacier” due to its recent tendency to disintegrate – faces dramatic changes in the next decade. It is already dumping 50 billion ton of ice into the ocean each year.

According to Erin Pettit, a glaciologist at the Oregon State University, the weak spots that the scientists have recently discovered are like cracks in a windshield: with just one more blow, they could spider-web across the entire ice shelf surface.

“You’re like, I should get a new windshield. And one day, bang – there are a million other cracks there,” she said. “This eastern ice shelf is likely to shatter into hundreds of icebergs. Suddenly the whole thing would collapse.”

Although the shattering of the Doomsday glacier will not immediately accelerate global sea level rise, it will not take much long until its effects will be strongly felt, and millions of people living in coastal areas will be endangered.

At present, the eastern shelf, which has a width of about 40km, moves forward at about 600m per year. The coming change in status will probably see the following ice jump in speed to about 2km per year - the same as the current velocity recorded in the 80km-wide western sector.

Each Antarctic summer season, teams of scientists are investigating the glacier's behavior in every way possible. From satellite, on the ice, and from ships in front of Thwaites.
This year, scientists will continue investigating the current status of the glacier by sending a tubby yellow submarine known as “BoatyMcBoatface” to dive under Thwaites’ floating ice in order to gather data on factors that influence melting, such as water temperature, current direction, and turbulence.