The Guinness World Record for the world’s largest hot air balloon glow show was broken in Saudi Arabia’s AlUla in the month of March.

The record attempt took place near Hegra, a UNESCO World Heritage site that is famous for its 100 Nabataean tombs which feature more than 2000 years of remarkably well-preserved inscriptions and symbols on the sandstone mountains. It is the site where ancient civilizations rose and fell and left behind a wealth of history for the kingdom.

"The project aimed to position AlUla as an international destination for hot air balloons and increase AlUla’s awareness globally as a tourist destination for unique adventurous experiences while diversifying the economic benefits for the local community from adventure travel and tourism sector the area can host," Guinness World Records posted on its website.

The exuberant display took place in the UNESCO World Heritage Site in the early hours of the morning. It marked the Royal Commission for AlUla and Saudi Arabian Ballooning Federation's announcement that AlUla has been named the "the capital city of hot air ballooning activities" in Saudi Arabia.

A total of 142 balloons participated in the balloon glow. The glow is a traditional mainstay of ballooning festivals and is where onlookers are charmed by an elegant twilight display of balloons turning their burners on and off to make their canopies glow. The festival also included dawn and dusk flights. Over 150 balloons took part in these.

The event was part of the AlUla Moments event calendar, designed to offer engaging arts, music and cultural experiences to visitors, followed by AlUla Wellness festival and Arts AlUla.

As a part of ‘AlUla Skies,’ a new festival in AlUla, the 142 brightly-lit balloons created an illuminating display over the ancient site.

The previous record was achieved in AlUla during its arts and cultural festival, ‘Winter at Tantora,’ in 2019, that time, there were 100 balloons.
The desert backdrop makes for a stunning vista by hot air balloon.

This is not the first time AlUla has broken world records. Maraya, the multi-purpose conference and entertainment venue also holds a Guinness World Records title for the World’s Largest Mirrored Building, featuring 9,740 Square Meters of mirrors, creating a stunning mirage reflecting the mountains and sand-scapes of Ashar Valley. 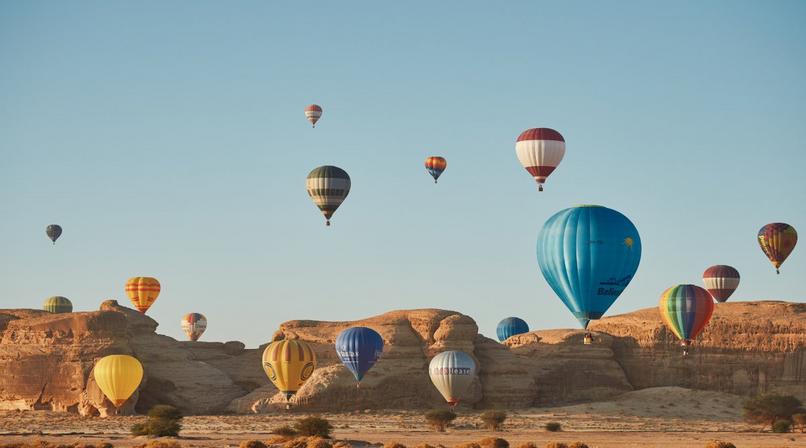