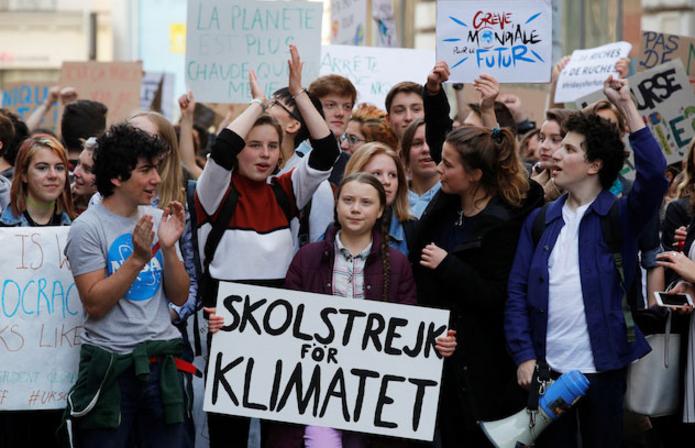 Greta Thunberg, the eco-activist has been nominated for Nobel Peace Prize.

She has addressed world leaders and top economists had an audience with the pope and been named Sweden’s woman of the year. Now the teenage activist is set to sail across the Atlantic in a climate-neutral yacht. The morning of August 20, 2018, the first day back at school after the summer break, was perhaps one of the last of Greta Thunberg’s life to be truly private. That was the morning the 15-year-old first sat down outside the Swedish parliament in Stockholm, a lone figure with a piece of cardboard hand-painted with the words “Skolstrejkförklimatet” — school strike for the climate.

For three weeks leading up to the Swedish parliamentary election, Thunberg skipped school. After that, she began to strike every Friday, pledging to continue boycotting classes for as long as it took for the Swedish government to live up to the Paris Agreement on climate change. On her Twitter account, she called her campaign “Fridays For Future.”

From the first of those Fridays, she was no longer alone outside parliament but joined by others who believed in what she was doing. The movement soon spread to other Swedish towns and across national borders to Germany, Belgium, the UK and elsewhere. By mid-March this year, #fridaysforfuture had become a truly global movement, with strikes on every continent. 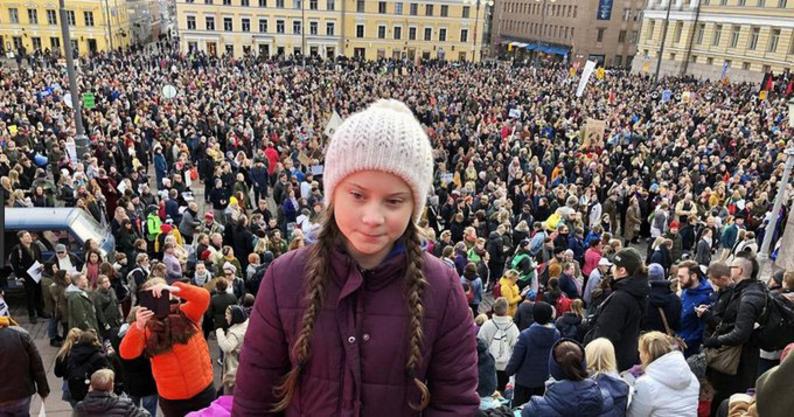 In industrialized countries, fears over climate change have been building over recent years. There has been a buzz over veganism, zero waste and trends like plogging. But Thunberg’s school strike took things a step further, capturing the urgency of the crisis with revolutionary energy that has driven young people out on to the streets.

In just three months, Thunberg became so well-known that she gave a speech at the UN Climate Conference in Katowice in Poland. Apparently unperturbed by the size of her audience, the teenager told the adults in the room and around the world, that they were “not mature enough” to speak the truth.

“Our biosphere,” she said, “is being sacrificed so that rich people in countries like mine can live in luxury. It is the sufferings of the many which pay for the luxuries of the few.”

The Malizia II boat with climate change activist Greta Thunberg aboard, heads out to sea from Plymouth. (AP Photo)

A few weeks later, she attended the World Economic Forum in Davos, where she delivered her message to some of the world’s most rich and powerful.

Since then she has addressed the EU parliament in Strasbourg, the French National Assembly in Paris and the House of Commons in London. Time and again, she has impressed upon her audience the urgency with which they must take scientific predictions seriously and do something to stop global warming or face drastic consequences.

Not one for small talk

Meetings with global figures such as UN Secretary-General António Guterres, Pope Francis, Barack Obama and Arnold Schwarzenegger don’t appear to faze Thunberg as she doggedly persists in raising the alarm.

Now 16 years old, she has collected numerous awards, been named Sweden’s woman of the year and nominated for the Nobel Peace Prize. Time magazine included her in its 100 most influential people of 2019.

By her own admission, Thunberg doesn’t like being the center of attention. But speaking on German television, she said she couldn’t complain because she’d put herself in that position. “It’s a small price to pay, knowing that you have an impact.”

By launching what has become a global school protest movement, she has achieved what scientists and climate conferences alone have not. For months now, climate protection has been at the top of the public agenda, putting policymakers under pressure. At the European elections in May, green parties made gains almost right across the board.

Not your average teenager

Thunberg might not relish the limelight, but she understands how to stage her appearances. She rarely boards a train journey without a tweet. Not your average teen selfie, but advertising for climate-friendly travel.

Thunberg doesn’t like being the center of attention. But speaking on German television, she said she couldn’t complain because she’d put herself in that position. (AP)

But not all the attention she attracts is positive. Far-right, populist climate-deniers, in particular, have gone online to agitate against her, but criticism has come from elsewhere on the political spectrum, too. In Germany, politicians such as Paul Ziemiak, Secretary-General of the Christian Democrat party (CDU), and Christian Lindner, leader of the Free Democratic Party (FDP) have publicly criticized Thunberg’s message.

That the young activist has Asperger syndrome has also been a talking point. Her opponents allude to it having made her vulnerable to becoming a naïve victim of the green lobby.

In an interview with German public broadcaster ARD, Thunberg said she was saddened by such hatred, but added that “since they are doing that, writing those things, it means that what we are doing, what the school strike movement is doing, is having an impact, and that they feel threatened by it. So I think it’s a positive sign.”

She went on to say that if she didn’t have Asperger’s, she “would have continued like everyone else, not noticing something was wrong. But I am different, I think different, I work differently.”

The young activist has Asperger syndrome has also been a talking point. Her opponents allude to it having made her vulnerable to becoming a naïve victim of the green lobby. (AP)

She says that if she believes something is important, she devotes herself to it 100%. Which is why she is taking a year off school to dedicate herself to activism.

This week, that means boarding the Malizia II, a yacht that will take her to New York for the UN climate summit in September. From there, she will continue on to the UN climate conference in Chile at the end of the year.

The yacht uses solar panels and underwater turbines to generate the little electricity it needs. It is skippered by German yachtsman Boris Herrmann, and Pierre Casiraghi, son of Princess Caroline of Monaco. A filmmaker and Thunberg’s father will also be on board for the two-week crossing.

Yachts like the Malizia II aren’t likely to become the norm for transatlantic travel, but the journey is symbolic and Thunberg’s tenacious commitment to avoiding emissions reinforces her message. Whether that determination will help her fend off seasickness remains to be seen.