The Economic crisis in Sri Lanka 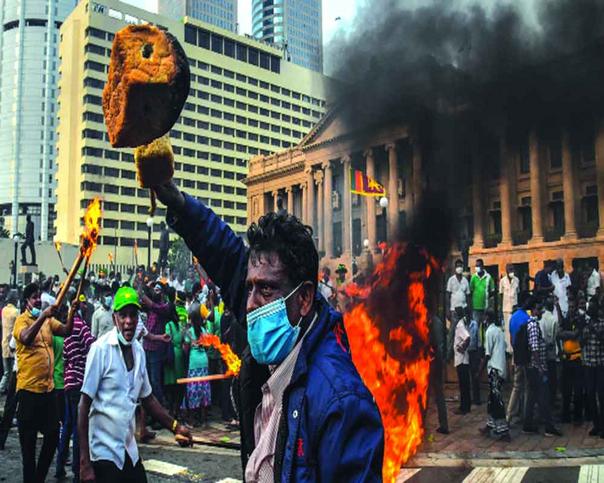 The Economic crisis and the rising foreign debt on the Government of Sri Lanka have worsened the scenario in the island country. The country known for its tourist attractions and scenic locales has now been financially broken and under severe foreign debt. The country has borrowed large and obscure amounts of money from the continental neighbours like India and China and also from the international monetary Fund IMF. Asian Development Bank and Japan are some of the other lenders. The economy hit an all time low when the pandemic of corona struck the entire world and the tourism industry in Sri Lanka was suddenly halted. It was the major source of revenue exchange for the country. Adding to the dilemma certain disastrous and faulty decisions on the Government’s part fuelled the crisis and now the situation is such that the people of the nation have clashed with the Government and demonstrated their strong objections to the Government’s policies. Financial blunders made by the Rajapaksa Government like the cessation of the taxes and the ban on the import of chemical fertilizers led to the downfall of the economic condition of the whole nation and also led to the decline of agriculture. The most ordinary of the Sri Lankan citizen now has to struggle daily in order to get the basic commodities like rice, tea and milk leave aside the fuel and LPG cylinders. People have to stand in long queues to get basic and essential items and that too at very high prices. The country has almost no foreign exchange left in order to import the essential items of daily use. The Sri Lankan currency is devalued now and the economic mismanagement by successive Governments especially of the Rajapaksa clan has caused financial deficit and a budget shortfall.

The Asian Development Bank has categorized the case of Sri Lanka as the one of twin deficit economy wherein the national expenditure exceeds the national income and the production of tradable goods and services is inadequate. The Gotabaya Rajapaksa Government had promised the voters a drop in the taxes during the elections which they fulfilled by cutting down the taxes. This irrational sledging of the taxes led to the emptying of the currency reserve of the country and the covid-19 situation worsened the scenario by diminishing the tourism industry. The credit ratings dipped to low levels in the international capital markets and the debt management of the country derailed with a 70% decline in the foreign exchange revenues. The Government decided to go 100% organic and banned all the chemical fertilizer import leading to a steady and sharp decline in the agriculture of the country, a crucial factor in sustaining any country’s economy. Now the situation is pathetic with the prices of rice going as high as 500 Sri Lankan Rupees and a milk packet of 400 grams costing as much as 250 Sri Lankan Rupees. This is the worst economic scenario ever witnessed in Sri Lanka. The country known for it’s high quality exports like tea, coffee, rice, rubber, spices and garments now stands in a bankrupt stage with a humongous foreign debt. The IMF stated that the public debt in Sri Lanka has risen to an unsustainable level and the Government’s economic decisions are insufficient in restoring the economy of the country. The current Government is incapable in the debt restructuring of the country which is badly required at this nth hour. After the soaring of the oil prices due to the Russia- Ukraine war the country suffered from a fuel crisis and had called on India and China for help. Indian Government has signed a $500 million credit line for diesel shipment with the Sri Lankan Government and another $1 billion for health and food facilities. An extra $1 billion is sought by the Sri Lankan Government for emergency requirements. China has given a help of $1.5 and $1.3 billion syndicated loan to the Sri Lankan Government and a$1.5 and $1billion loan is further sought for approval by Sri Lanka.  The Sri Lankan Government is left with only $2.31 billion in it’s reserves with a hovering debt repayment of around $4billion in 2022 including an ISB International Sovereignty bond worth $ 1 billion maturing in the month of July. The Foreign debt on Sri Lanka is a staggering $12.55 billion with maximum attributed to the sovereignty bonds and loans from countries like China and Japan.

China’s Exim bank had sanctioned a loan of US $1.12 billion for the infrastructural enhancement of the Hambantota port. As the Sri Lankan Government was inefficient in the repayment of the loan the Hambantota port had been given to the Chinese Merchant Group for a 99 years lease. Such financial offensives have exacerbated the problems of the common people and there have been instances of violent clashes amongst the public and the police. The country has asked for a 17th IMF loan to tide over the current crisis. The country is facing uninterrupted power cuts of more than 12 hours per day as there is an acute shortage of hydro-electric power generation because of the lack of rains. The country is facing an emergency situation not only with the burden of escalating foreign debt but also decline in the agricultural produce, shortage of power and fuel supply across it’s entire expanse.