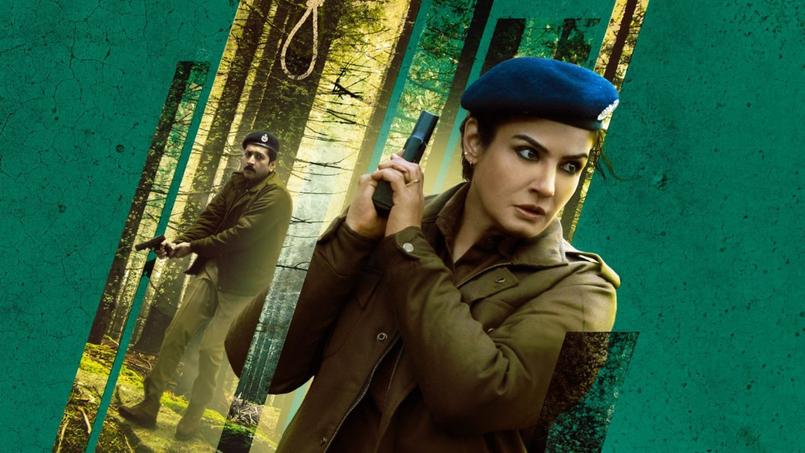 Now we live in a world where OTT content has taken over theatrical releases and TV premieres this one is a fresh take on quite a familiar plot of suspense thrillers and murder mysteries. The world was fast and has become even faster.

The drama begins when Parambrata Chattopadhyaya( Angad Malik) takes charge at a lesser known hilly town in Himachal Pradesh and Raveena Tandon( Kasturi Dogra) quips about not getting the BIG case in hand. Later they both work in tandem to solve the case of a gory rape and murder of a French teenager played by Anna Ador. Raveena is not so suave and sophisticated and gets down to the coarse language while on duty. Though she is a Proficient cop she is not so good a home maker and is unable to manage the work- life balance.

It is a 8-part series set in a fictitional town of Himachal Pradesh. Like many suspense thrillers set in Mountains and Hills this too points to a creature of mysterious origins to be the perpetrator of the crime against many innocent young women. Both Raveena and Parambrata do justice to their characters and their roles are etched out strikingly prominent in the script.

Raveena does what is expected of a national award winner and delivers her performance with aplomb. She is determined to find the killer of the French teenager whose body was discovered hanging from the tree in the dark forests. Is local Politician Jagdamba( Megna Malik) and her son behind that or somebody else has committed the crime and has gone scot free. Jagdamba’s son is already serving the sentence in jail. Former royal Kuber Manhas

(Zakir Hussain) and his daughter Priyanka Setia and her husband Indraneil Sengupta are also under the scanner.

This high-strung suspense drama is created by Rohan Sippy, directed by Vinay Waikul and written by Charudutt Acharya. The episodes are of 45 minutes each and are gripping and exciting throughout the end. Performances are fine and Ashutosh Rana is the surprise element who is the lone witness to the wild killer of the dark forest.

Mahesh Shetty and Saurav Khanna are in pivotal roles. There is no-ends guessing game on the plot and quite a lot of suspects are there. Too many wild twists and complexities are there just like the serpentine ways of the hills. Quite a visual treat for the lovers of murder and suspense mysteries and for die-hard Raveena fans.