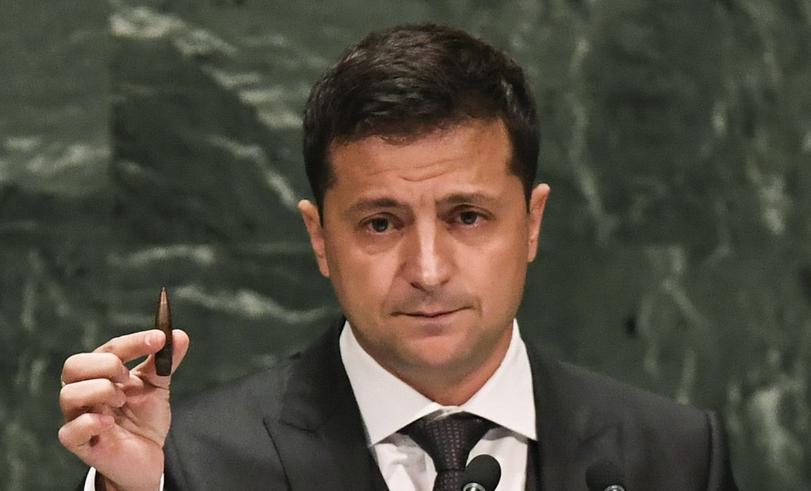 Zelensky sends a message at the Cannes Film Festival.

The 75th edition of the Cannes Film Festival officially inaugurated with an emotional opening ceremony that attained monentum as Ukraine president Volodymyr Zelensky appeared virtually to address the Palais audience live from Kyiv. During his speech, Zelensky referred to Charlie Chaplin’s The Great Dictator and the role that film had in denouncing Hitler during World War II. The 1940 picture “didn’t destroy the real dictator but thanks to this film, cinema was not silent,” he said. The Ukraine president continued, “On February 24, Russia began a war of huge proportion against Ukraine with the intention of going further into Europe… Hundreds of people die every day. They are not going to get up after the end clap… Will cinema stay silent, or will it talk about it? If there is a dictator, if there is a war for freedom, again, it all depends on our unity. Can cinema stay out of this unity? We need a new Chaplin who will prove that, in our time, cinema is not silent.” He added, “I say to everyone who hears me: do not despair; hatred will eventually disappear and dictators will die. We have to win this victory and we need cinema to ensure that this end is always on the side of freedom.”

The message from Zelensky was well received in the Palais where just ahead of his video, Mistress of Ceremonies Virginie Efira noted that as Cannes celebrates its 75th edition, “Ukrainian directors, Russian dissident filmmakers have their place because there are realities that crush everything and impose us because there are voices that we must listen to.”The festival has a ban on state-sponsored Russian delegations but features film Tchaikovsky’s Wife (which screens tomorrow) which is directed by Kirill Serebrennikov, an outspoken Russian dissident. Earlier in the opening ceremony, Forest Whitaker accepted an honorary Palme d’Or for his body of work, originally having won the Best Actor prize here for Clint Eastwood’s 1988 Bird. He recalled that time saying tonight, “memories came flooding back” to 34 years ago and that “Cannes confirmed I made the right choice” of profession. The evening also included the introduction of the jury led by Vincent Lindon — a stalwart of French cinema and winner of Best Actor here for 2015’s The Measure Of A Man, as well as a star of last year’s Palme d’Or winner, Titane. So far, there has not been that much emphasis on this being the 75th anniversary of Cannes — a special day is dedicated to the milestone on May 24. The opening ceremony of the honorable film festival began to the tunes of George Benson’s “On Broadway.”