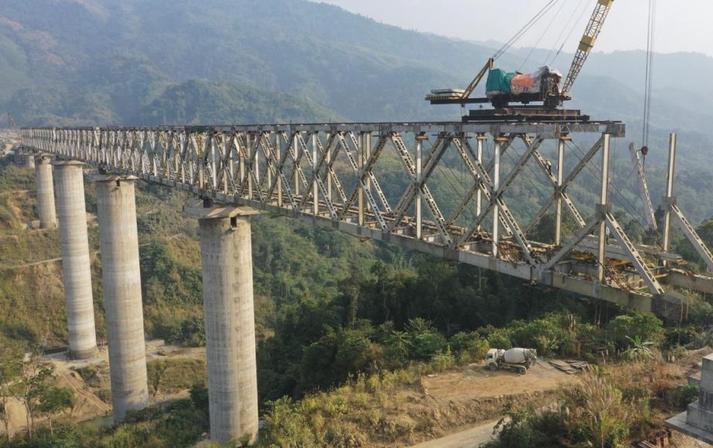 The Indian Railways is constructing the world’s tallest railway bridge pier at Noney Valley in the state of Manipur with a height of 141 metres. As a part of the ambitious 111 Kilometre long Jiribam-Imphal railway line, which aims to connect the capital of Manipur with the broad gauge network of the country. This bridge at Noney Valley will surpass the Mala-Rijeka viaduct’s existing record of 139 meters, located in Montenegro, Europe.

"With the completion of the project, the 111 km of distance will be covered in 2-2.5 hours. Presently, the distance between Jiribam-Imphal (NH-37) is 220 km, which takes about 10-12 hours of travelling. After the construction, the bridge crossing Noney valley will become the world's highest pier bridge," Sandeep Sharma, Chief Engineer of the project said. The bridge is expected to be completed by December 2023, he further added.
Sharma said, “The first phase which extends for 12km has already been commissioned. Nearly 98% of the work is complete on the second phase and by February 2022, it will be ready.
“The third phase from Khongsang to Tupul will be completed by November 2022. The fourth and the last phase of the bridge which extends from Tupul to Imphalvalley, will be completed by December 2023.”Nearly 61% of the 111km project will include tunnels.

The total anticipated cost of the bridge is Rs 374 crore, the Chief Engineer said. Sharma, while speaking about the hurdles and challenges that are being faced in the bridge construction, said during monsoon, landslides often occur on NH-37, which is the only route to this place. From the month of April to October, there is immense rainfall here and it is difficult to work here during that time. Also, there are some problems related to insurgency, which sometimes creates a problem, he added.