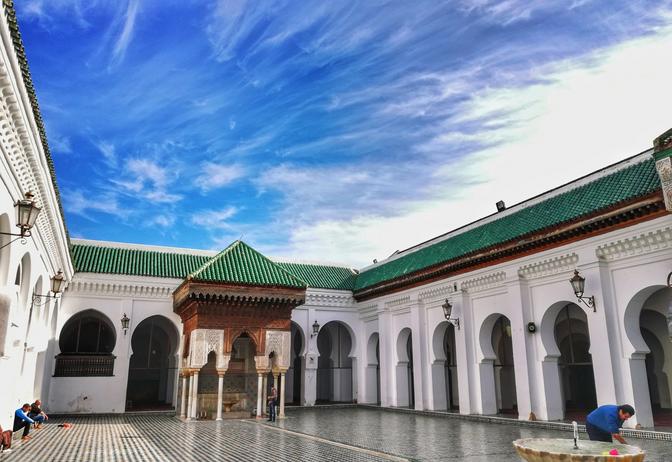 The University of al-Qarawiyyin, also written as al-Quaraouiyine and al-Karaouine (in Arabic: جامعة القرويين), is considered by the Guinness World Records as well as UNESCO as the oldest, continuously operating, degree-granting university in the world.
You’ll find it within the winding alleyways of Fes el-Bali, Morocco, one of the world’s most ancient living cities.

Founded in 859 A.D. by Tunisian-born Fatima al-Fihri in Morocco’s Fez, the university is not only the oldest higher education institution on Earth but also the first to be founded by a woman, and a Muslim one at that.

Fatima used her inheritance from her merchant father’s wealth to found the university which started as an associated school, known as a madarsa and a mosque that eventually grew into a place of higher education. It also introduced the system of awarding degrees according to different levels of study in a range of fields, such as religious studies, grammar and rhetoric. Though the university first focused on religious instruction, its fields of study quickly expanded to include logic, medicine, mathematics, arabic grammar, music, sufism and astronomy among many others.

From the 10th century the famous mosque of al-Qarawiyyin became the first religious institute and the largest Arab university of North Africa. It attracted a lot of students and renowned scientists.

Symposiums and debates were regularly organized there. According to the available documents, teaching chairs were established at the university and in other annexes throughout Fez. These same records mention the existence of a great number of libraries.

It is also the first degree-granting educational institution in the world.

Located in the heart of the old city, the complex is composed of a mosque, university and library, and is connected to the labyrinth of interconnecting streets and alleyways on all four sides. Its ceramic green tiled roofs take center stage over Fez’s urban sprawl from any viewpoint over the city.

The mosque is off limits to non-Muslims, so most tourists can only seek glimpses of the structure’s grand courtyard and its intricate, hand-painted carvings, arches and water fountains through the large doors on all four sides. Rooftop terraces within the medina serve as vantage points, allowing for breathtaking views over the mosque and its white minaret that sends out the call to prayer across the town.

From ground level, the true shape and structure of the complex is hidden, where buildings are stacked so close together that roofs touch and crossover above the alleyways. But the trail of grand doorways and wooden walls help visitors define its outline.

Starting out as a mosque with an adjoining Quranic school and humble library, al-Qarawiyyin has transformed over the years into a world-famous institution, drawing people from all over the world to study there.

The library holds a 16th-Century vault, with an impenetrable copper door that has four locks and requires four key holders to open it. This system was used to protect only the most precious texts. Abdelfettah Bougchouf, the library’s curator, has the only key to the one lock that is still used.

Throughout its history, the university has been the place of scholars well known to this date, such as 12th-century cartographer Mohammed al-Idrisi, whose maps helped the European exploration during the Renaissance. Despite the fact that the university was a gathering point for students of Islamic studies, it also attracted people from other religions as well. One of the Christian scholars visiting al-Qarawiyyin was Pope Sylvester II (946-1003), who was known to have a passion for mathematics and astronomy.

The university, however, was only added to Morocco’s university system in 1963. Contrary to common misconceptions, both women and men could attend the university. In 1965, the institution was officially named the University of al-Qarawiyyin instead of the short al-Qarawiyyin. At the beginning of the 1990s, its student body shrank significantly due to interest in newer, Western-style universities.

To this day, the university keeps its traditional ways of teaching students by sitting in a semi-circle, called halqa, around the sheikh or the instructor.

Much of the university is still highly traditional, from the student demographics to the style of instruction. Students, who range between the afes of 13 and 30, seat themselves in semi circles, called halqa, around the sheikh or the instructor when reading texts. They can work towards high school-level diplomas or university degrees, and before they arrive at al-Qarawiyyin, they must have memorized the entire Quran as well as several shorter texts. Students come from different parts of Morocco and Inslamic West Africa and even Muslim Central Asia.

The University of al-Qarawiyyin reminds us that it is not Oxford or Cambridge that first set the stage for university learning, but a mosque’s madarsa that, over 1000 years ago, set those gears in motion.