Receiving the Padma Shri in January and Khel Ratna in August. What do these awards mean to you and your family?
This is a recognition for women’s hockey. When I told my father that I won this award, he didn’t understand its significance. My parents are not that educated. So they are not that aware of these awards. When I explained and told him I’m the first woman hockey player to receive it, he got emotional. He cried and said he is proud of me. It’s a great feeling.

How has this journey been?
Journey was quite hard. It wasn’t very easy. I was 14 when I started in the Indian team. There were good and bad moments. So, it was all about how you managed the tough periods… and there were injuries as well, you had to handle that. But it’s a proud feeling everytime you represent India, the whole of India’s population. They have their hopes pinned to you. So, you play with that in mind. So, the aim always is to do something for your country.

It’s been a decade since you debuted for India. How have you changed over the years?
It’s been a tough and good journey. I have grown as a person and player. When I started, I didn’t believe one day I would lead the Indian team. But the passion for hockey drives me to achieve. I always tell myself that just because I’m from a poor background, it doesn’t mean I can’t work harder. I know I have to toil every day and never give up in life. Awards and medals motivate me to perform better than I have so far. I’m thankful to the coaches and players who’ve helped me in this journey.

Many young players have said you are a calming influence in the team as captain. Your thoughts?
I feel I should lead by example by working harder than others. Actions speak over words, that’s my mantra. Remaining grounded after being successful is something I’ve learnt. If I perform, others will get inspired and do well. I’m also learning from juniors. They have different talents and mindsets. There has not been a day when I thought ‘it’s enough, there’s nothing to learn.’ We learn from each other. I’m happy I got the chance to play with a talented bunch, in the past and present.

What are the differences between the team that you joined and the team you are now captaining?
When I started, there were no systems in place. The work now is more systematic. For instance, in training we observe how much workload is given to a player and the recovery period of a player, what is the muscle soreness, if they are feeling some heaviness. So, we have a scientific trainer who gathers these data. And, the schedule is prepared accordingly. So, in that aspect, there is a change.

Even the mindset of the players have changed. They are more confident now.

After being at SAI centre in Bengaluru for four months, you went home for one and a half months and now you are back in the camp. How have the past months been?
It was tough being away from family. But the girls supported each other during difficult times. At the SAI campus, we felt safe. I spent my days at home doing basic fitness drills as advised by Wayne Lombard (scientific advisor) to keep the body in shape. In 10 years, this was the longest I got to spend with my family. Now, my nephew and niece recognise me as a family member and not an outsider who visits once in a few months. Coming back to Bengaluru and undergoing quarantine was not exciting. But as sportspersons, we are mentally tough. We learn how to handle situations.

With momentum broken, how tough is it to manage physical and mental conditioning at a high level to peak at the Olympics?
It was initially heart-breaking to know about the postponement of the Olympics. But there are always takeaways. It is not easy to come back to the level we were in five months ago, but it is the same for every athlete. Now that we have resumed training, it will take time to get into rhythm.

What’s been your biggest achievement so far?
There are lots of things… I played the World Cup when I was 15. It’s a big deal to play the World Cup at that age. And I was top-scorer as well. And, I think, that was a great moment. And, when we qualified for the Olympics after 36 years, I scored the winning goal. That was a great achievement too. Then, the Arjuna award in 2016. I was made the captain, then, in 2017. But all these achievements are because of hard work and support of my teammates. Without them, these things wouldn’t have been possible.

Do you think Indian hockey, especially women’s hockey, has grown over the years?
Yes, I think the women’s hockey level is up now in our country. And 2018 is the biggest year for us to bring hockey to the forefront. If you look at the last two years, women’s hockey has done good. We won the Asia Cup, did well in the recent Korean tour, qualified for the Olympics after 36 years. There are lots of things that are improving the graph of women’s hockey. But it’s just the beginning. And, it’s a step-by-step process. You have to perform well in each tournament so that there’s a high standard that gets set for women’s hockey. The girls in our country have to have a craze for hockey. Like, after PV Sindhu’s silver medal, there’s a peak in interest for badminton. So, we have to set a similar standard. So, it’s a great opportunity for us now to take women’s hockey to higher places.

Rani Rampal speaks about her achievements in Hockey 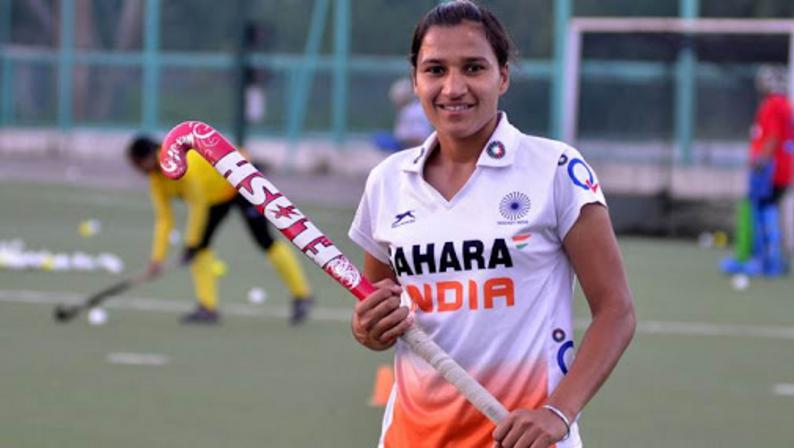