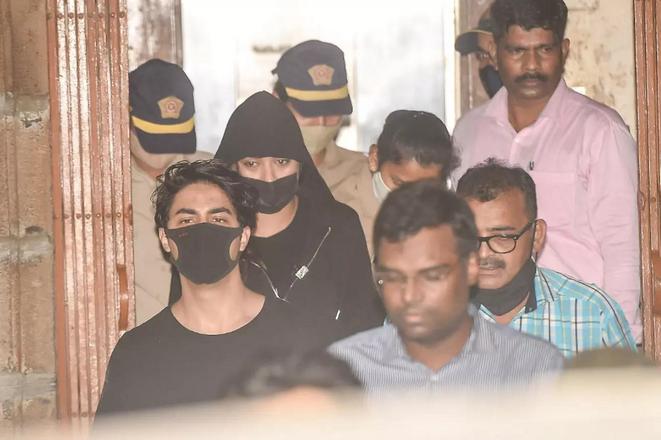 Additional Solicitor General Anil Singh, representing the central agency, referred to on-record statements to claim to the court that "he (Aryan Khan) used to consume it for the last few years".

"Aryan Khan is not taking drugs only once... the statement that has been received shows that he used to consume it for the last few years. Drugs have been found from Arbaaz Merchant (Aryan's friend, from whom six grams of charas were seized) ... Aryan was with him," Mr Singh told the court.

"When the IO (investigating officer) asked if he had drugs, Arbaaz said he had drugs in his shoes... Arbaaz admitted that both (he and Aryan Khan) were going to consume it on the cruise."

The ASG also told the court statements to a NCB officer under the NDPS Act - referring to Aryan Khan's statements on his use of drugs, which the defence has claimed was forced - is "admissible in court until proven wrong during the trial."

He also said it was incorrect to link "use" of drugs with "consumption".

"The definition of 'use' is that it can be used for anything other than personal consumption. That is, according to the definition, it is not being used for one's own consumption," Mr Singh said.

"In this case 15 to 20 people are involved and there is talk of conspiracy... if commercial quantity has also come to the fore," he said, in reference to claims Aryan "indulged in illicit drug trafficking".

ASG Anil Singh also sought to counter arguments by Aryan Khan's legal team that their client was "not present" during the raid, had no cash to buy drugs and didn't have any on him.

"The allegation of illicit trafficking is inherently absurd. This boy who has nothing, he was not even on the vessel. It is an absurd and false allegation," Aryan's lawyer, Amit Desai, had said.

In response Mr Singh said: "There are also sections... If drugs were not found from you but, in the same case, if drugs in commercial quantity is found from others, action can be taken on that basis."

"My submission is that bail cannot be granted in this case," ASG Anil Singh said.

In yesterday's hearing Aryan Khan's lawyers underlined the fact the NCB had found no drugs on their client or any evidence that suggested he was about to use banned substances.

On the NCB claim that Aryan Khan had "admitted he was about to use charas that was found on Arbaaz Merchant", his defence team said the admissions were forced. "The court knows how people are forced to make these statements," Mr Desai, who once represented actor Salman Khan, said.

Aryan Khan was arrested hours after the anti-drugs agency's officers raided a Mumbai cruise ship party in disguise on October 2. Seven others, including Arbaaz Merchant, were arrested on October 3.

Aryan Khan has been in Mumbai's Arthur Road Jail since then; this morning he and five other accused were shifted from the quarantine block after their mandatory Covid tests returned negative.