After about 396 years of being a British Colony, Barbados has become the world’s Newest Republic. Barbados is said to have been made a ‘slavery society’ by the British. It first became an English colony in 1625. It gained Independence in 1966. This Caribbean Island Nation removed Queen Elizabeth II as the head of the state.
An overnight ceremony was held in its capital, Bridgetown marking the birth of the new republic. Several leaders and dignitaries, including Prince Charles, attended the ceremony which included dazzling display of fireworks, dance and music.

With the Prince of Wales watching,72-year-old Dame Sandra Prunella Mason, was sworn in as the first president of Barbados while the Royal Standard Flag representing the queen was lowered. 30 November marks the day Barbados officially becomes a republic.
Prince Charles, heir to the British throne, attended the “Pride of Nationhood Ceremony”, which included military parades, a mounted guard of honor, gun salutes, dances and fireworks. “The creation of this republic offers a new beginning,” he said in a speech to the ceremony. “From the darkest days of our past and the appalling atrocity of slavery, which forever stains our history, people of this island forged their path with extraordinary fortitude.”

Hundreds of people lining Chamberlain Bridge in the capital cheered and a 21-gun salute was fired as the national anthem was played.
Announcing the decision to cut ties with the monarchy in 2020, Prime Minister Mia Mottley, who led the ceremony, also said, “Barbados shall move forward on the first of December as the newest republic in the global community of nations.” She further added that the real work would begin the day after Barbados had become a full Republic. Barbadian singer Rihanna also attended the ceremony and was declared a national hero by Mottley.

There are no plans to change the flags, coat of arms, national pledge or national anthem. However, the terms “royal” and “crown” would be dropped from all official references. Hence, Royal Barbados Police Force will become Barbados Police Force and crown lands would become state lands.
The country would continue to celebrate Independence Day on November 30, but not just in remembrance of removing Queen Elizabeth II as the head but also in the memory of the country’s first president Errol Walton Barrow.
Mason had also said in the speech, “The time has come to fully leave our colonial past behind,” She added, “Barbadians want a Barbadian head of state.” 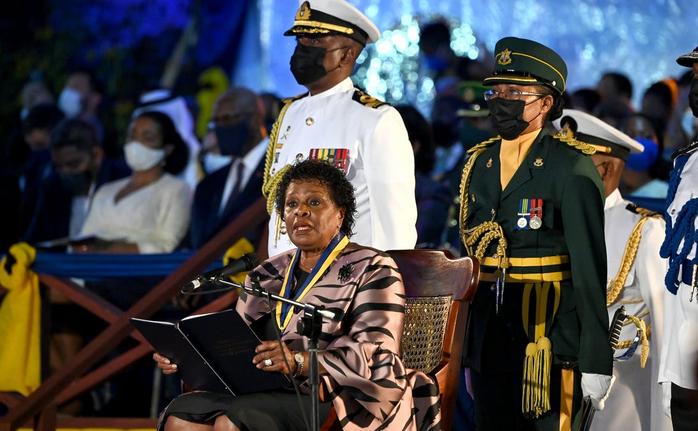