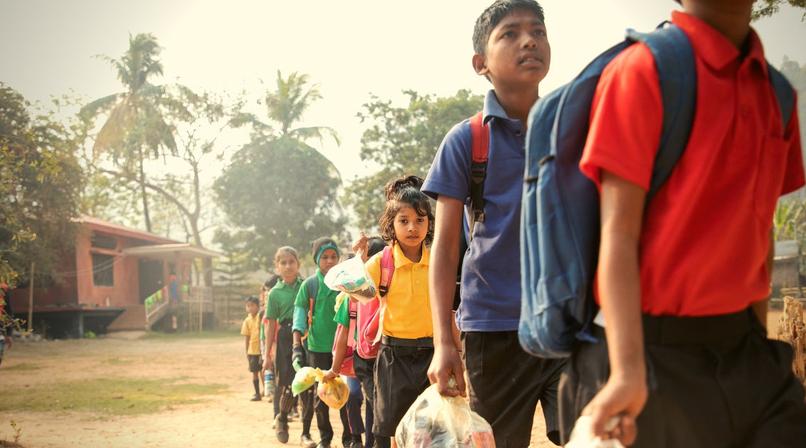 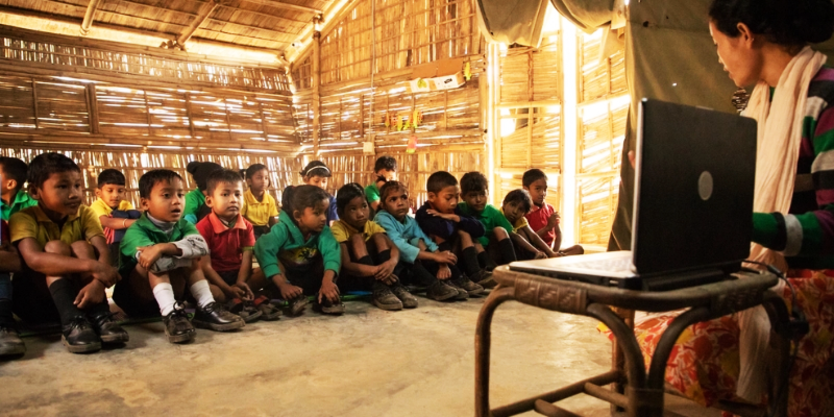 A school in Assam accepts plastic as school fees.

Mazin said that the foremost challenge which they faced while starting the school was to convince the villagers to send their kids to school as most of them worked in the stone quarries as labourers to earn for their families. So they designed the curriculum in such a way that would fit the child’s needs and build a creative pipeline of employment, post-education.

The students earned Rs 150 – Rs 200 per day at the stone quarries. According to Parmita, they could never match that monetarily, so instead they proposed a mentorship peer-to-peer learning model, where the older students teach the younger ones and in return get paid in toy currency with which they can buy snacks, clothes, toys, shoes from the nearby shop. The older students teach younger children every day at Akshar, which serves two purposes – one, it makes them feel valued and important; second, they can have less number of teachers.

With the help of the students, the school also educates the community about the harmful effects of burning plastic. They teach the villagers to recycle the waste and become agents of change. As a result of the school’s initiative, more and more families in the village have started participating in the recycling drive and spreading awareness.

With the help of teachers, the students make numerous construction materials with plastic waste. The students have already created some eco-bricks with the waste material and built some plant guards in the school premises. They also wish to build boundary walls, toilets and some pathways which will help the children go from one place to another when the school campus is waterlogged, with the help of eco-bricks.

Unlike other schools, Akshar does not have an age-specific admission system. Rather, students attend the same classes together at Akshar while sitting in open spaces. Parmita said, “The levels are decided on the basis of knowledge of the students, tested at the time of admission—the school has tests every Friday. The students will then have to perform well to climb up the levels. This is to ensure that the quality of education is continuously improving.”

The Akshar School, which started with just 20 kids, now has more than 100 children studying in the school. It now has eight bamboo huts to run their classes and two digital classrooms donated by some people. The school curriculum has various vocational courses, including cosmetology, embroidery, singing, dancing, organic farming, gardening, solar panelling, recycling and electronics.

Both Mazin and Parmita got married in 2018. The couple now aspires to build 100 such schools across the country in the next five years.

As the sun rises, scores of children with bags full of books and smiles on their faces walk through the lanes of Pamohi to reach a school situated in the pristine woods of the capital city of Assam. The children, however, do not come to this school only with bags full of books. They bring with them polythene bags full of plastic waste as the only form of fee which this school accepts. The Akshar School in Guwahati has the kind of fee structure where children deposit at least 10 to 20 plastic items per week, with a pledge to not burn plastic.

“We wanted to start a free school for children, but stumbled upon this idea after we realised a larger social and ecological problem brewing in this area. I still remember how our classrooms were filled with toxic fumes every time somebody in the nearby areas burnt plastics. Here it was a norm to burn waste plastic to keep warm. We wanted to change that and so we started encouraging our students to bring their plastic waste as school fees,” said Parmita Sarma.

Parmita Sarma and Mazin Mukhtar founded The Akshar School. The school has been giving formal education to more than 100 children belonging to an economically backward category. The school has designed the curriculum fundamentally for poverty-stricken children. Not only do they teach children lessons on Science, Geography and Mathematics, but also provide vocational skill training so that they can become skilled professionals by the end of the course.

Earlier in 2013, when Mazin Mukhtar came to India from New York for a school project, he got in touch with Parmita Sarma, who was a Social Work student at the Tata Institute of Social Sciences (TISS) and was already working in the education sector. Parmita was already doing work in the education sector, and she also had plans to start a school. When they met, their goals were so overlapping that they decided to start Akshar together. All these things ultimately led to the establishment of the school Akshar.