At the museum, the child curators are given a free hand to enter another dimension of imagination with artefacts and reinterpreting them thematically. This creates the magic. This is the perfect showcase which creates a difference between an “exhibition” and “curated” show. The museum truly offers an opportunity for time travel and engagement beyond history textbooks. Children perceive it as their personal space where they do as their mind directs them. There is no special imposition. This effort is a push to make them independent.

In 2018, the CSMVS conducted a series of workshops for the 25 children (of ages 8-14) who are behind the museum’s inaugural exhibition, Footsteps—Framing The Future. The curatorial team was chosen through an essay and art competition with the theme “My Little Museum: The Museum Of My Dreams", held across 37 schools in Mumbai in 2018. The original art and essays by the curatorial team are currently displayed at the CSMVS’ Premchand Roychand Gallery.

The finalists were trained to look at various aspects of curating exhibitions, including writing curatorial notes. In time, the children settled upon 22 objects out of a roster of 300 from the museum’s collection. These objects sit in glass cases in the new museum, with multilingual object notes placed at a child’s eye-level for easier browsing. The objects are sorted by themes chosen by the curators, such as “Friendship" and “Teamwork".

For the “Courage" section, for instance, curators Harsh (class VIII) and Anurag (class III) wrote about personal experiences that involved acts of courage, like admitting to a teacher that their homework wasn’t finished. In this section, an early 20th century print depicting a fierce Rani of Jhansi, from Pune’s Chitrashala Press, was accompanied by a damascened steel scimitar from the 18th-19th centuries—both obviously indicative of the theme. A charkha (spinning wheel), connoting ahimsa (non-violence) and the swadeshi movement, is also placed here, adding an additional layer to the meaning of courage.

The Children’s Museum also has an amphitheatre and a gardening area, but what really draws attention are the stone benches that circle a veteran fixture, the baobab tree. This is the outdoor storytelling section, which will hopefully follow the larger theme, where the children will speak, and the adults will listen.


‘A light pavilion in a setting of trees’

The centre is conceived as a light pavilion in a verdant setting of large trees. An outdoor amphitheatre is built into the sectional profile of the structure, accessed via the amphitheatre staircase, a large terrace deck functions like a tree house, welcoming children and adults alike.

How does the Children’s Museum respond to the architecture of the CSMVS?

This low-key, glass and steel structure is imagined as a gentle introduction for young visitors. The Children’s Museum is a foil and contrast to the large-scale stone Grade 1 Heritage main museum block.

The Museum is for the children and by the children, an effort to make the future generation more efficient and independent. The Inaugural took place on 30th march. 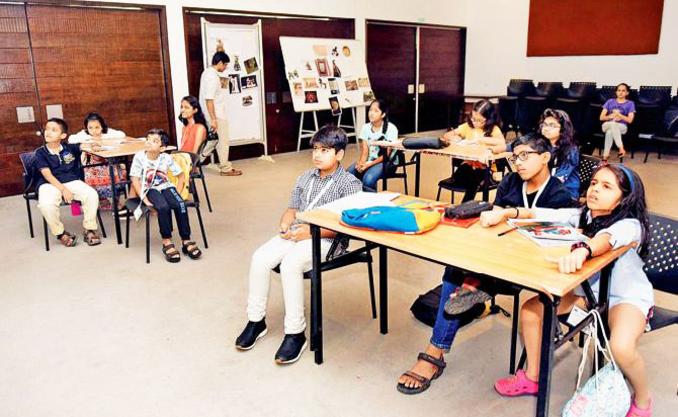 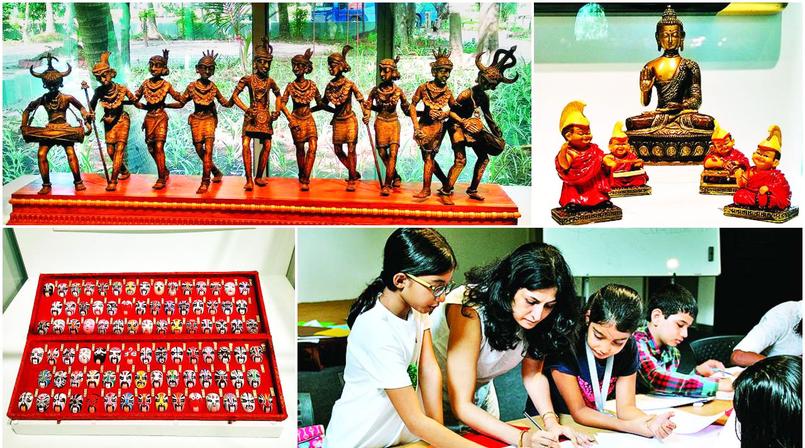 While we teach children all about life, children teach us what life is all about. There can be no keener revelation of a society’s soul than the way in which it paves its road for children. Mumbai’s first children’s museum opened in March 2019. The inaugural exhibition had been conceptualised and curated by 25 children. The Children’s Museum is designed by architect Rahul Mehrotra and his firm, RMA Architects

It’s good to see the old and the new in conversation with each other," says Sabyasachi Mukherjee, director of the Mumbai-based Chhatrapati Shivaji Maharaj Vastu Sangrahalaya (CSMVS). The premise has an elegant boardroom within the 97-year-old institution, but Mukherjee’s remarks were directed at the youngest addition to the museum. The CSMVS has been preparing for this moment from 2014, probably even earlier, he added.

Experiencing his daughter’s childhood, he observes her life to be monotonous between the walls of schools, tuitions, and institutions with lack of informal spaces for an intellectual and creative growth. He realised children don’t have enough informal spaces apart from swimming pools and playgrounds. Adults have many things available like art galleries, museums, libraries, lectures, theatres and restaurants. Mukherjee decided to address this problem and approached his friends with the idea of a space “for children, by children", and in 2014, Kaku Nakhate, president and country head at Bank of America Merrill Lynch India, offered to sponsor the Children’s Museum with a funding of ₹5 crore.

The CSMVS already has a prominent presence in India’s cultural infrastructure and has brought landmark exhibitions to Mumbai, some of which travelled across India and internationally. Most recently, from November 2017 to February 2018, it hosted India And The World: A History In Nine Stories in collaboration with the National Museum in New Delhi and the British Museum in London.

The pebbled path ushering to the Children’s Museum winds around a grove, and is strewn with fallen mangoes and amla (Indian gooseberry). He claims the plot used to be a neglected corner of the museum grounds.

The museum has been designed by architect Rahul Mehrotra and his firm RMA Architects, consultants to the CSMVS since the 1990s. RMA Architects designed the museum’s Annex Block and Visitor Centre, envisaging these as contemporary interventions in the heritage, conservation-oriented precinct of the Kala Ghoda and Fort areas.

Mehrotra teaches urban planning and design at Harvard University’s Graduate School of Design, believes, the contemporary expression of the Children’s Museum is a reminder of the dynamic nature of the museum as an institution that straddles both its role as a depository of the past and also one that engages with speculating about the future.

For Mukherjee, who was raised in Santiniketan in West Bengal, the Children’s Museum is a reminder and piece of his home-town shipped to Mumbai. Two mango trees rise up through the museum’s roof and a young palm tree graces a corner, much like a column. It has been designed the around these permanent residents to accommodate and create a gallery which will allow fluid exhibition layouts. Furthermore, Mehrotra’s design uses glass extensively, allowing for an unobstructed view of the world outside. The transparent structure makes you an integral part of nature. And that’s where the concept of Santiniketan comes about.