We at Herald Global, met the most sensational and soulful singer Armaan Malik.

We asked him about journey further. The charm of the youth surprised us by revealing he got his first pay cheque at the age of 8. He used to sing for children’s movies, advertisements and jingles. At the age of 10 he participated in the first season of the singing show for children, Sa Re Ga Ma Pa Lil Champs. He was one of the top contenders. He says that was a different experience in his singing journey. He adds that he comes from a family with the musical legacy, right from his grandfather to his uncle Anu Malik and his father Abu Malik to his brother Amaal Malik and himself. He felt it was an offbeat choice to be a participant on a reality show as artists eventually attend as celebrity guest once they are actors or musicians. He feels participating was important and it made him a better singer. He tells us that it laid the foundation for him in his growing years and if he hadn’t done it he wouldn’t be a better singer.

With so many genres we wanted to know how he classifies himself. As a musician he identifies himself to be a Pop and R&B singer. He also explains that classifying himself doesn’t restrict himself in molding to sing various other genres. He is versatile and can blend his skills into singing classical songs and EDM songs as well. He smiles and reveals in Bollywood he is recognized for romantic songs. We immediately told him we love his songs and he shyly smile. He believes as he has got a success in romantic Bollywood songs he is known for it but he isn’t restricted to the classification.

Another lesser known fact about this soulful singer is that he sings in different languages like Bengali, Telegu, Kannada, Malayali and so on. We wished to know how he prepares himself for regional songs. He excitedly told us that he started at the innocent age of 8 and was learning to do voice overs. When he would go for advertisements like Complan and people would approach him to try different languages and as a kid nothing tempted him to sit back. He started doing jingles, advertisements and voice overs at daily basis in regional languages before he even knew it.

He made progress over the years by adapting in hearing different languages, writing them in English and reproducing it making a stronger skill set. He started through Salman Khan’s film Jai Ho before his Bollywood career, he received many opportunities from the South Indian industry to sing when he was 18 years old. He shares that the training began at the age but he bore the fruits of his labour at 18-19 years of age.

With strong distinguished skills, we asked him how he would differentiate himself from other singers in the industry. He jokingly asks us our perspective instead. He says that he is a person with blinkers and just focusses on great singing instead being distracted by what others can deliver. He believes in his work and himself.

He is the youngest Indian to perform on world platforms. We were intrigued to know about his experience. He says he is the first Indian to perform at the Wembley Arena in London at the age of 21 as compared to other accomplished singers who went at the age of 30-35. He cherishes the opportunity as he had popular songs to perform. He believes being the first one in the country made him proud and also India proud. He states being the first one has helped many young people to trust their career choice and start at any age.

He reveals he did not have anyone to follow as an example in India. According to him Justin Beiber in USA was an inspiration to make such a choice at a young age. He adds that not having an Indian example was like not having a case study but diving in for the first time. Being a pioneer, he made mistakes and rectified them too. But he is proud to have opened avenues for the generation.

He is famous for writing quotes on Instagram and twitter. He shares one of them with us as one of his life lessons. “Aspire to be someone and inspire someone to be you”. He wrote this 4-5 year back, when he was clueless about his journey but he is amazed at how everything has come together and turned out to be living this quote.

We asked him about his fan community called the armanians. He feels its unreal. He reveals that winning awards and accolades, gaining x number of views is exciting but the connection with his fans in his journey cannot be defined. A lot of his fans are his age and are growing up with him. He explains completing his academics with them and the growth of his music was with them too. He believes its more than an idol fan relationship and they are very close. He remembers some of them by their whole names. He wishes all them on their birthdays on twitter and follows them all. He says it’s a team effort and team love to be together. He shares that they all are waiting for them to put of something and passionately shower him with love. He lovingly accepts it as a victory and the biggest award in his journey.

Since he started at a very tender age we asked him if the industry is welcoming to a new talent. He replies that you have to prove yourself in some or the other way and show your substance to enter the industry. He accepts that they are not welcoming at the very first instance but once you have marked your beginning you then there is no end.

As he mentioned being the youngest to launch of his singing career, we asked him if he had any golden rules or suggestions for anyone who would like to get into the industry. He has two distinct perspectives. First being the support of the family, he explains his parents were very supportive from the beginning. He says he connects with the youth as Indian parents are very focused on main streams like medicine and engineering and don’t think that music and singing are viable career choices. His father is from the film industry but his mother is from the education industry and she wanted him to complete his graduation which he couldn’t and she is still sad about it. Since his career took off when he was young he had to put his education on the back burner. He recollects one of Justin Beiber’s interview where he said he graduated as he studied on the go during his tour and Armaan Malik suggests the Indian government to come with such a plan for Indian artists.

He reveals that having your parents at your side is half the battle won.

He says Social media is a very important tool to get out there! He observes that many new artists put their songs on social media and get a break through in Bollywood. He said that it gives an opportunity to perform in front of a live audience and reality shows are not the only route to recognition anymore.

Last but not the least we asked him about his inspiration in the music space. He shares that Justin Beiber is the biggest inspiration on the planet for him as he also started at a very young age; he had a phase where he was drugged and he was bold enough to share that with the world in a documentary. He says as artists success could get many temptations with it but we need to learn to stay grounded. He also believes Sonu Nigam is his invisible guru. He hasn’t formally trained under him but he has listened to his songs and learned along. He follows Sonu Nigam passionately and states that this personality and music go on the same breath. 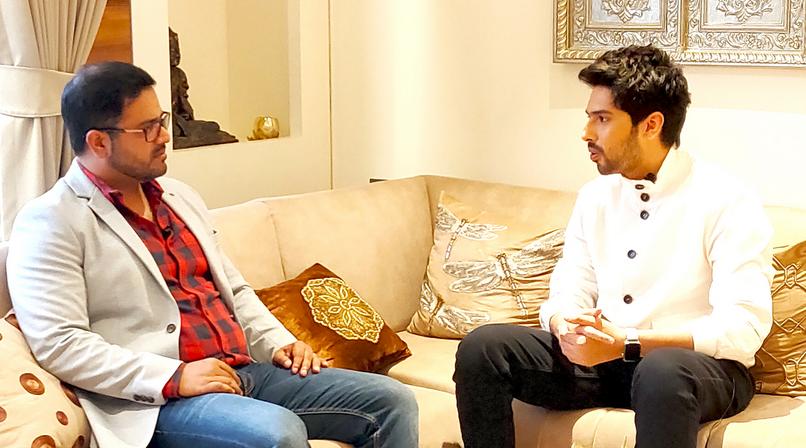