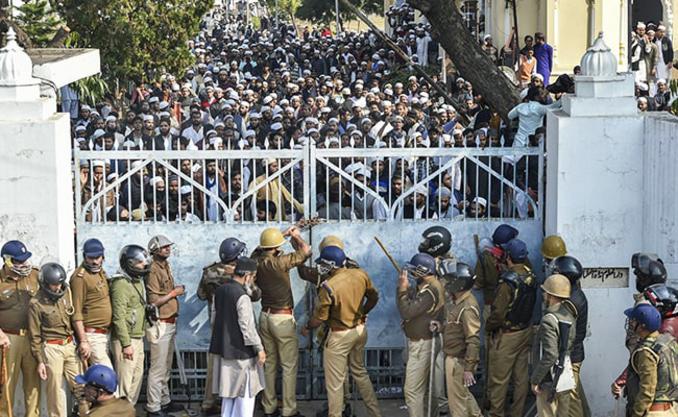 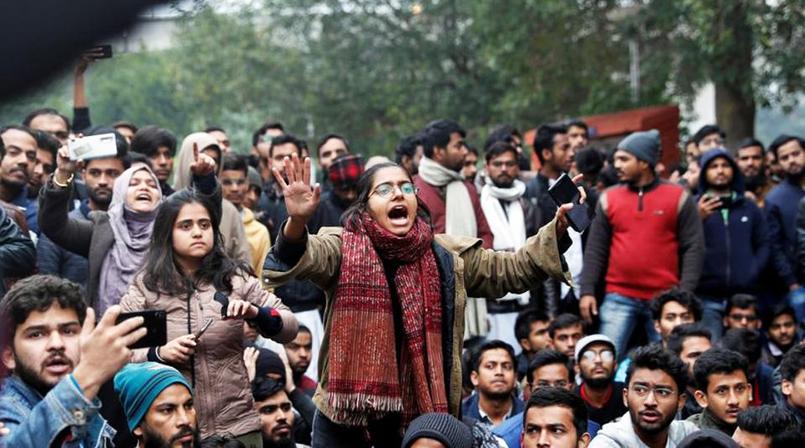 The Citizenship (Amendment) Bill voting in Rajya Sabha was taken up after six hours of debate on the legislation. Rajya Sabha Chairman and Vice President Venkaiah Naidu had allotted the six-hour time to the MPs to discuss the Indian citizenship bill.

Besides the Bhartiya Janata Party (BJP), the CAB was supported by JD(U), SAD, AIADMK, BJD, TDP and YSR-Congress. The Shiv Sena did not participate in the voting. The citizenship bill was on Monday passed by the Lok Sabha with a majority of 311 votes against 80. Here is all you need to know about the Citizenship (Amendment) Bill or CAB.

WHO GETS THE INDIAN CITIZENSHIP?

The Citizenship (Amendment) Bill proposes to grant citizenship to the non-Muslims Hindus, Sikhs, Christians, Buddhist, Jains and Parsis -- from Afghanistan, Pakistan and Bangladesh who arrived in India before December 31, 2014.

In other words, the CAB paves way for Indian citizenship to lakhs of immigrants, who identify themselves with any of the given religions, even if they lacked any document to prove their residency. It also means that any immigrant who does not belong to the said communities would not be eligible for Indian citizenship.

Also, as per the Citizenship (Amendment) Bill, any illegal immigrant from Afghanistan, Pakistan and Bangladesh who belongs to these said communities will not be deported or imprisoned if they are not carrying any valid documents for their residency in India.

Earlier, the duration of the immigrants' residency was 11 years. The amended bill has reduced it to five years. This means that immigrants from the three countries and from the mentioned religions, who have entered India before December 31, 2014, would not be treated as illegal immigrants.

The Citizenship (Amendment) Bill exempts certain areas in the North-East from this provision.

The Citizenship (Amendment) Bill would not apply to tribal areas of Assam, Meghalaya, Mizoram and Tripura as included in Sixth Schedule of the Constitution and the area covered under the Inner Limit notified under the Bengal Eastern Frontier Regulation, 1873.

This effectively means that Arunachal Pradesh, Nagaland and Mizoram along with almost whole of Meghalaya and parts of Assam and Tripura would stay out of the purview of the Citizenship (Amendment) Bill.

Besides, the citizenship bill also makes amendments to provisions related to the Overseas Citizens of India (OCI) cardholders.

As per the citizenship bill, a foreigner may register as an OCI under the 1955 Act if they are of Indian origin (e.g., former citizen of India or their descendants) or the spouse of a person of Indian origin.

The Citizenship (Amendment) Bill entitles the OCI cardholders to benefits such as the right to travel to India, and to work and study in the country. The Citizenship Bill, which was passed in the Rajya Sabha, amends the Act to allow cancellation of OCI registration if the person has violated any law notified by the Central government.

The Opposition parties severely criticised the passage of the Citizenship (Amendment) Bill by Parliament, with Congress interim president Sonia Gandhi saying it marks a "dark day" in the constitutional history of India and is a "victory of narrow-minded and bigoted forces" over the country's pluralism.​ 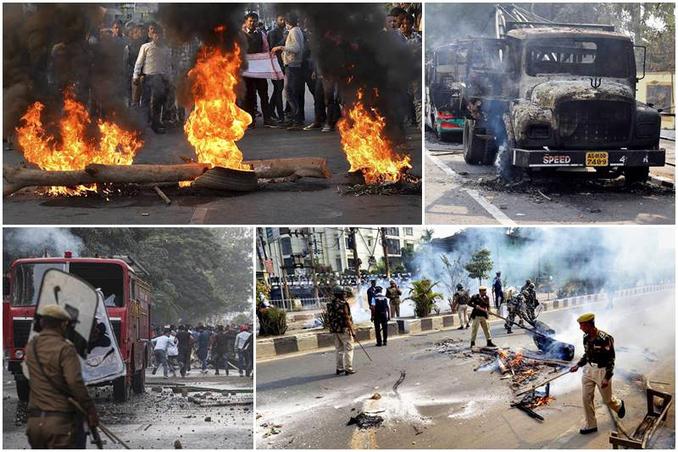 Several senior Congress leaders indicated that the party may move the Supreme Court against the citizenship bill with Abhishek Singhvi saying that the legislation will be legally challenged in the near future as it is "highly suspect" in terms of constitutionality.

Hitting out at Home Minister Amit Shah over his remarks in support of the Bill, senior Congress leader P Chidambaram told reporters, "The Home Minister says 130 crore people are supporting us, obviously he does not count Assam, Northeast and all other protesters as part of the 130 crore."

"No one in the government would take responsibility for the content of the CAB or its constitutionality. The intent of the Bill is to tell the Muslims 'you are not equal human beings with equal rights'," P Chidambaram said on Twitter.

Former prime minister HD Deve Gowda said he was opposed to the Citizenship (Amendment) Bill as "it will totally destroy minorities and is unconstitutional".

The Janata Dal (Secular) president said the Bill was contrary to the principles of secularism and other rights incorporated in the Constitution.

"You can't go against secularism and other constitutional principles," HD Deve Gowda said, adding, "I can't support such a Bill as it would create unrest in the country."

Trinamool MP Derek O'Brien too termed the Bill as "unconstitutional" and warned of people's movement against the Bill. He also said it would be challenged in the Supreme Court. He said the present bill has been drawn from "Nazi Coffee Book" and is part of BJP's "agenda".

Samajwadi Party MP Javed Ali Khan said through the proposed legislation, the BJP was fulfilling the dream of Muhammad Ali Jinnah, the founder of Pakistan.

To repeated questions from the Opposition of Muslims being left out, Home Minister Amit Shah said Muslims from other countries have the right to apply for Indian citizenship as per existing rules. As many as 566 Muslims have been given citizenship, he said.

He attacked opposition the Congress saying statements by the party's leaders match those of Pakistani leaders on not just the citizenship bill but also on scrapping of Article 370.

Amit Shah said the bill seeks to correct the wrong done by the partition of the country on religious lines. He went on to attack the Congress for alleged doublespeak on the issue, saying the party had during its rule given Indian citizenship to 13,000 Hindus and Sikhs from Pakistan without raising a word about the same for other communities.

He also said the bill does not violate Article 14 of the Constitution as it does not prohibit laws based on reasonable classification.

Authorities at Jamia MilliaIslamia University on Monday termed Sunday’s police crackdown against its students as a “war-like situation” and demanded a high-level probe into the incident. The Federation of Central Universities’ Teachers’ Associations (FEDCUTA) also demanded a judicial enquiry into the matter to be done by a sitting judge.

As many as 50 students, who were detained during protests at the Jamia MilliaIslamia University against the contentious law in the national capital, were released in the wee hours of Monday. While 35 of them were released were the Kalkaji police station, the remaining 15 were released from New Friends Colony. Over 100 people, including students, policemen and firefighters were injured, after cops lobbed teargas shells inside the college campus, forced their way in, and allegedly dragged students out of the library and the mosque, and assaulted them. Meanwhile, West Bengal Chief Minister Mamata Banerjee called for a mega rally in Kolkata to protest against the citizenship law.

The assault on students at Jamia Millia by Delhi police prompted filmmaker Anurag Kashyap to return on Twitter and expressed his anger on the recent developments. Reacting to police lathicharge on the Jamia students, Kashyap called the Modi government “fascist” and said, “he can’t stay silent any longer”.

“This has gone too far.. can’t stay silent any longer. This government is clearly fascist .. and it makes me angry to see voices that can actually make a difference stay quiet,” he wrote on Twitter.

Kashyap’s protest comes after several students, who were protesting against the contentious amendment in the Citizenship Act, were beaten up and detained by Delhi police who entered their campus on Sunday. The incident triggered several protests in universities across the country including Aligarh Muslim University, Hyderabad University, Delhi University, IIT Bombay, and others.

The Citizenship Amendment Bill, A burden on India!

Other voices from the film industry also condemned the police action inside the Jamia University. Actor Taapsee Pannu said the videos of police action inside the campus were heartbreaking. “Wonder if this is a start or the end. Whatever it is, this is surely writing new rules of the land and those who don’t fit in can very well see the consequences. This video breaks heart and hopes all together. Irreversible damage, and I’m not talking about just the life and property,” she tweeted.

Director Sudhir Mishra tweeted, “In 1987, I made a film called ‘Yeh Woh Manzil Toh Nahin’ on the background of student politics. Towards the climax, the police enter the campus and brutally beat up the students. Nothing has changed. Terrible that now we know where the flowers (have) gone. Crushed!”

Actor-filmmaker Konkona Sen Sharma said, “We are with the students! Shame on you @DelhiPolice.”

Hollywood star John Cusack also took note of the videos from inside the campus, which have gone viral on social media. He first asked the context of the protests and wrote, “Reports from Delhi are – it was a war zone last night – Fascism is not a joke – we use the word with the understanding, it’s deadly.”

“On behalf of the students of Jamia & AMU request at least one of you to tweet or message Mr Modi condemning this act of police brutality and violence against students. The time has come to speak up guys. Yes? No? May be?” @RanveerOfficial, @karanjohar, @ayushmannk, @RajkummarRao” tweeted actor Sayani Gupta, tagging fellow actors Ranveer Singh, Ayushman Khurana, Rajkjumar Rao and director Karan Johar.

Actor Rajkummar Rao also condemned the police action while appealing for peaceful protests. “I strongly condemn the violence that the police have shown in dealing with the students. In a democracy, the citizens have the right to peacefully protest. I also condemn any kind of act of destruction of the public properties. Violence is not the solution for anything!,” he wrote on Twitter.

“Those who are clapping or silent at this time, do not panic, when the same police and people do this to you, we will still fight and speak for you,” actor Mohamad Zeeshan Ayyub posted on Twitter.

Actor Ali Fazal said, “It’s funny, I felt, hey Ali, let’s play it safe all these years. And now I can’t. A lot of my colleagues may not speak up at all. But I pray we all realise there is no job, no career above humanity. Socho, aur time kamhaitoh act fast (Think, and if you have no time, then act fast). Irrespective of your political ideologies right now,” he wrote on Twitter.

Actor Swara Bhasker, who has been a vocal critic of the BJP-led NDA government in the past, wrote, “Shocking messages of violence, tear gassing from #Jamia in #Delhi ! Why are students being treated like criminals? Why are hostels being tear gassed? What is going on #DelhiPolice? Shocking and shameful!”

Actors Richa Chadha, Vikrant Massey, Swara Bhaskar directors Anubhav Sinha, Onir and Reema Kagti were also among those who voiced support for those protesting against the Act. 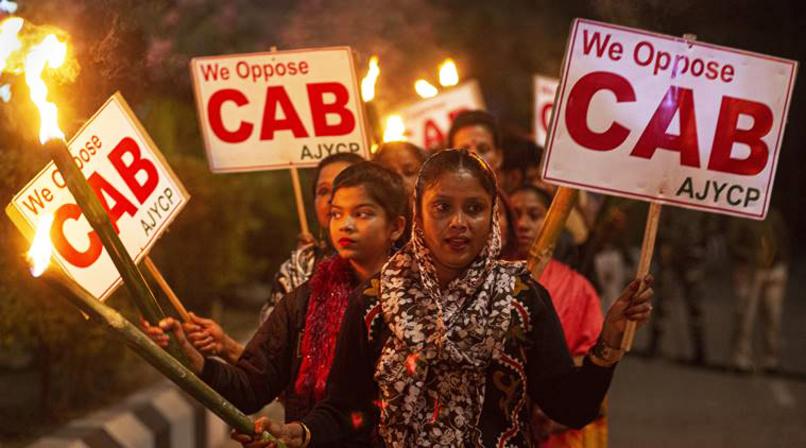