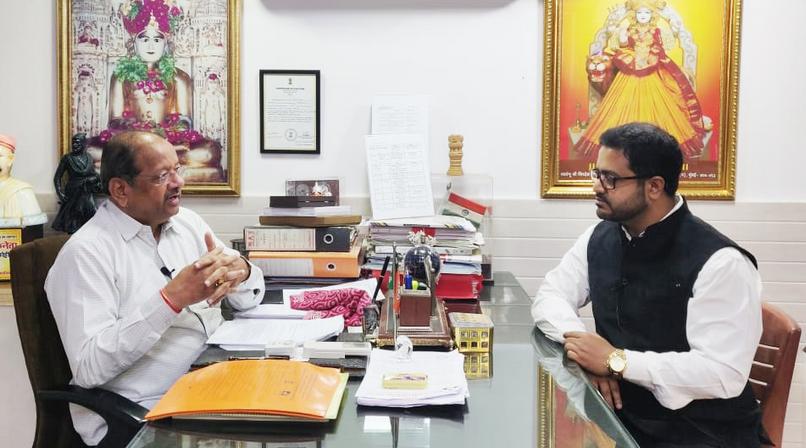 We began with our first question asking what intrigued him to join politics. He recollects and narrates to us that in the year 1982 when Mr. Ram Naik was the MLA of his area, his vicinity was devoid many facilities including basics like water, toilets, lights. He took the initiative of approaching the MLA and visited the BJP office. He stated their problems to Mr. Ram Naik, who further visited the area and solved their problems gradually in the span of 4-5 years. This influenced Mr. Gopal Shetty a lot and put him in a thought process that there may be many like him who are facing problems about basic facilities.

He was suggested to join the BJP but he wasn’t interested to set foot in politics. They printed 500 visiting cards appointing him as the General Secretary of the BJP, Borivali in the beginning before he became the member. The card and the request influenced him to join the governance.

Later in 1992, Mr. Ram Naik became the president of BJP and asked him to contest in the Municipal Corporation of Mumbai. He was a dye maker for 35 years and was satisfied with his success in the industry which led to the refusal of being a corporator. But with due to the constant persuasion of Mr. Ram Naik he contested in the election and the journey of winning every election he contested began.

We asked him that how can we accelerate the process of making basic facilities accessible, he warmly says it’s all about the leadership. As time changes we might be doing the same job but we have to adapt to our surroundings and technology. Since he has been in the service for 40 years he also believes with God’s grace he will be of great service to people.

We asked him what he feels differentiates his constituency from others. He smiles and passionately tells us, that he has developed 98% of the roads and maintenance in Borivali. He was developed gardens, playgrounds, gymnasiums and lot more in the areas of Malad, Kandivali, Borivali and Dahisar. He has created medical facilities in cheaper rates for people. He states “I love Humans and I am a people’s person.” He believes that he provides people with whatever they demand and is always looking forward for the welfare of the people.

We further asked him his opinion of the CAA and NRC. He was more than willing to explain. He explained that this act is not brought about by Mr. Narendra Modiji or Amit Shahji but it has been present in our Constitution long before. He also adds that an individual from Pakistan can apply for citizenship in India and this act is practiced not only in India but throughout the world. People who move to America from India, get a green card but our country does not follow a system. Before 1947, India was not divided but after we got freedom India was divided into two countries India & Pakistan. Pakistan took the status as a Muslim country and India as a secular country.

He told us that the Hindus, the Sikhs and the Buddhists who lived in Pakistan had their lands there and stayed there after the division. But further after they started facing problems and came back to India. In 2014, Mr. Narendra Modi promised them citizenship during his campaigns if he was brought to power. Mr. Gopal Shetty further tells us that the span to get citizenship in India was earlier to live for 12 years and now the people for Pakistan, Bangladesh need to spend 5 years in India to apply for citizenship. He points out other parties like the Congress asking why not Muslims. He replies that Pakistan is a Islamic country and Hindus, Catholics, Sikhs, Buddhists are minorities as it is a Muslim populated country. Hence if these minorities are prosecuted in these countries they come to India.

With the current ongoing political unrest, we asked him what he would like to tell the citizens of the country. He tells us India is a democratic country which means that the people choose the political party which would rule the governance. He states that Mr. Narendra Modi was brought to power in 2014 and further again in 2019. He feels that as Congress was in support earlier they cannot think it’s their birth right to rule as that would be deviating from Democracy. He says that people have selected Modiji to lead, we must let him run the government for the people of India.

We asked him what marks a good governance. He states that delivering the needs of the people as a priority and people enjoying it is a good sign. He strongly believes that the BJP is in power as they delivered and made changes after election in 2014. As people were happier with the improvements they won again in 2019. He believes this a pure sign of good governance.