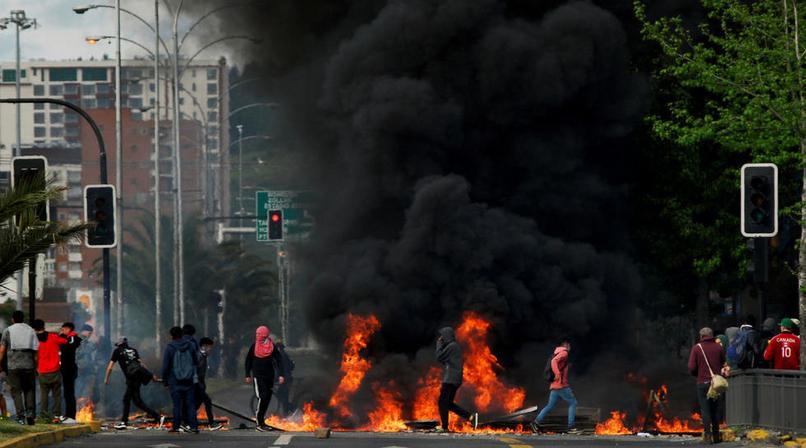 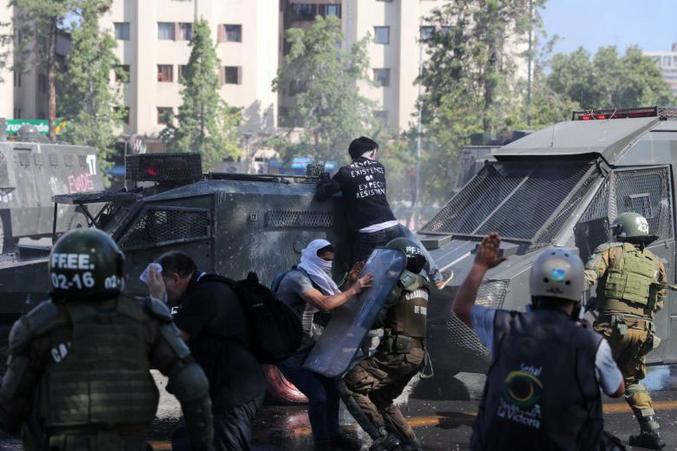 Chile declares state of emergency amid looting and arson in capital.

President Sebastián Piñera of Chile declared a state of emergency in the capital after protests against public transportation fare hikes devolved into looting and arson targeting subway stations, banks and buses.

These demonstrations began as a campaign by high school students, who jumped subway turnstiles to protest the second fare increase this year. But on Friday night, demonstrators set fire to dozens of subway stations, several banks, buses and the headquarters of the country’s largest electricity provider, Enel. Looters stormed into supermarkets, stores and pharmacies.

The city woke Saturday morning to calm, amid what the regional governor of Santiago described as “a level of destruction never seen before.” Government officials confirmed Saturday morning that more than 300 people were arrested, 156 police officers and 20 civilians were wounded and 41 metro stations were damaged.

The state of emergency declared by Piñera imposes restrictions on citizens’ right to move about and assemble freely, and it gives the army authority over internal security. Speaking from the presidential palace around midnight, he said the measure was needed to restore order after the chaos caused by protesters, whom he called “delinquents.”

The sight of military tanks and troops roaming through the streets after Piñera’s announcement was jarring for many Chileans, given the country’s 17-year military dictatorship, during which the armed forces committed rampant human rights abuses. The president appointed an army general to oversee security operations.

The fare increase, which went into effect Oct. 6, unleashed fury, coming at a time when the cost of living for poor and middle-class families has been rising while wages remain stagnant. Average monthly salary is $807, about a fifth of which is spent on transportation.

“Everything that is going on is so unfair, because everything is going up: transportation fares, electricity, gas, everything, and salaries are so low,” said Isabel Mora, an 82-year-old retiree who receives a monthly pension of about $62.

As he announced the state of emergency, Piñera said he would try to find ways to mitigate rising transportation costs. With the fare hike, a rush hour subway ride now costs about $1.20.

As hundreds of people stormed into subway stations without paying, the protests spilled into the streets. Special police units barged into stations and deployed tear gas, beat up demonstrators and violently dragged people from subway cars to take them into custody.

The subway system suspended service for several lines, and by nighttime it had been forced to shut down the entire network. Hundreds if not thousands of people were left stranded on the streets. Unable to board overflowing buses, many had to walk for hours to get home.

Government officials called the demonstrators “organized vandals” and “criminals” and announced that they would enforce an internal security law that gives the state the authority to impose higher penalties for crimes.

Residents in the capital banged pots and pans throughout the city Friday night. As people burned subway stations and set up barricades, the police appeared to have retreated to their units.

“The people who govern the country seem to be living in a different world from the rest of us,” said Enrique Araya, a 49-year-old attorney, as he banged pots with his family in front of a subway station. He added that the true impetus for the protests is feelings of impotence. “The metro fare was just the detonator,” of the protests, he said.

The protests were occurring as Chile prepares to host two major international conferences: an APEC summit meeting in mid-November and the United Nations Climate Change Conference in December.