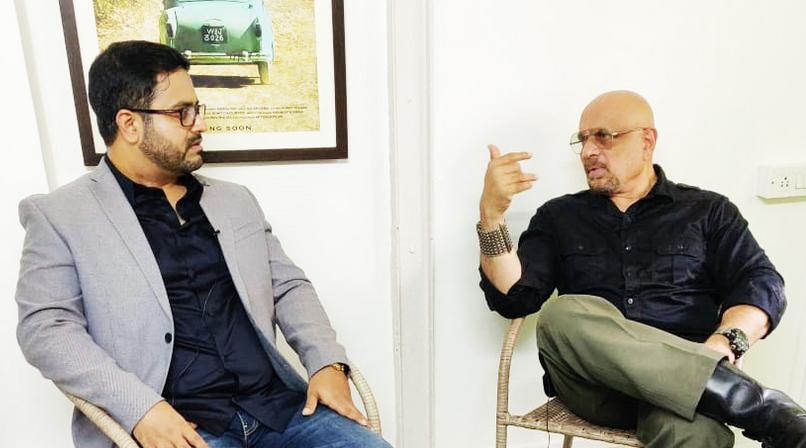 “I Indianized Amul and the Amul girl.” opinionated the Industry’s No. 1 game changer of advertising Mr. Bharat Dabholkar.

He also said that Hindi and Marathi were his strong points. Growing amongst Gujratis he also knew how to read and write the language. He realized that there is nothing like perfect English and starting using the words of other languages. Speaking in mixed language helped him a great deal in advertising. It was an advantage as there were Hindi writers, English writers, Gujrati writers and Marathi writers but no one could mix and write advertising like him. He was criticized by the grammar Nazis but someone saw the bright side and came up with a fashionable word “Hinglish”. And he was titled as the Father of Hinglish.

He joked about being handicapped at English but Hinglish made way for him and that’s the way everyone speaks now.

We asked him about becoming a boxer. He told us he represented his college and University and practiced boxing for two years.

We were curious to know about his unusual purchase of an auto rickshaw. He told Herald Global that he always owned a bike. Being in an advertising firm the bike had certain restrictions to carry luggage. He thought to himself that buying a rickshaw would be cheaper and convenient. He went to buy a new one which was over a lakh. He wasn’t keen on spending that much so he travelled to Boisur and got himself a second-hand auto rickshaw for around Rs 70 Thousand and customized it. He got theseats from Chorbazaar and also got a license. As it’s a private vehicle he can drive along anywhere in the city. He also adds that he used to live in Worli so he got a sticker called Worli Davidson printed for his auto rickshaw which he conveniently continues to drive along even now.

With years of experience in advertising, we asked him his views on the change in the industry then and now. He explained that according to him advertising has changed drastically. He explains that there are specific agencies for specific functions. Advertising had big money but with the many avenues which are now open to the youth now in advertising and it’s no longer a professional’s job. He believes that advertising is fun but not a top preference anymore.

In terms of creatives he shared that Amul as a client had complete faith in him. They would not interfere in his creativity and at the end of the here he would visit the head with an album of the ad campaigns he had created. He states now there are layers and different managers with varied point of views. Unlike engineering, which is only understood by engineers, everyone understands advertising. Everyone needs to know what the campaign is about and everyone wishes to make a point. He says that there is nothing wrong with youngsters joining advertising and having a say but the artists are losing their respect.

We noticed the Amul campaigns are socially relevant over the years. We urged him to tell us about his ideology behind the campaign. He said the butter eating audience was westernized. With hinglish he wrote lines in Hindi and Marathi for Amul. He believes he Indianized Amul. He wrote the ads in Gujrati for Ahmedabad, in Bengali for Kolkata and in Tamil for Tamil Nadu. He sums his contribution as the indianization of the language used on the hoardings and the indianization of the girl.

We asked him about the inspiration about his play Blame it on Yashraj. He told us that Indian weddings are losing the traditional touch. A south Indian bride who would wear a white sari with a golden border wants to wear a lehenga and wishes to have a sangeet. He told us Yash Chopra is a dear friend but alsobelieves Yash Chopra has glamourized weddings in to a big affair. This inspired him to write a play about two characters who wish to get married and the marriage turns into a big affair with detailing like discussion on number of guests, the wedding planner, the choreographer and so on.

With his achievements now and then we decided to ask him about his inspiration. He says there are many for different aspects of life. He says P.L. Deshpande and Dara Singh the wrestler are his inspiration and he has been very close to them. For advertising he believes life has been the greatest inspiration of all.

Mr. Bharat Dabholkar is a distinguished ad-guru and actor. We asked him about his journey on gaining the titles. With a warm smile he revealed he did not wish to get into advertising. He began first job in an agency for client servicing with big clients like Amul, LIC and Bank of India. He would handle their accounts and at one point he started writing for them. He eventually became the creative head and the client servicing manager both for these accounts. He claims it got easier as he got the brief for the creatives directly and would starting writing on his own.

He recollects writing skits for the ad club. He told us he found it difficult to write as everyone expected sophisticated English and he did his schooling in Marathi. He wrote a skit in all languages which caught on like wild fire.

Known as the father of Hinglish, we were curious to know the story behind it. He chuckles and says he is scared to tell us the story but he continued to narrate it. He revealed he was in Aryan High School, a Marathi medium school in Girgaum. Al the subjects were taught in Marathi. After his HSC, he took admission in Elphinstone College for Arts. In his first year he realized he had to learn English to speak to anyone. He told us the vernacular medium teaches English but spoken English always remains a challenge as they don’t understand what is the right word to be used. He expressed being shy and told us he was made fun of as he would say the wrong English word.